Book: The Amazing, the Incredible, Super Dog by Crosby Bonsall

Puppets: Cat, Dog, Puppet Stage
Props: Hoop, Ball, Pillow for Dog
Presenters: 2
Here’s one of those books that can be done pretty well by one person, but is ideal for two. In the story, the girl brags about all of the tricks her dog (named “The Amazing, the Incredible, Super Dog”) can do. But each time she announces the next trick, the dog just sits there. Meanwhile her cat Willy (who “doesn’t know any tricks”) does all of the tricks spectacularly, but without the girl seeing. Reminis

cent a bit of Officer Buckle and Gloria (which I still want to do without the book one of these days). For telling it in Family Storytime, Sheila was out in front of the puppet stage interacting with our dog puppet (who just sat there), while I was behind the stage as Willy. After about the second trick, the kids all got it and began telling Sheila: “The cat is doing it! Look at the cat!”

We adapted just a bit, using tricks that came through best visually with our cat puppet. Standing on front legs wasn’t so good. Standing on his head worked great once I reversed the puppet on my hand so it faced me when standing up, but faced the crowd when on its head. The tricks get harder and funner as the story goes on. For “catch a ball,” Sheila tossed the ball over her shoulder and Willy jumped up and caught it above the stage. Well, he caught it during three of the four performances. Jumping in the air was great: just tossed Willy up toward the ceiling from behind the stage.

In the solo version, you just have to kind of exaggerate your focus on Super Dog, 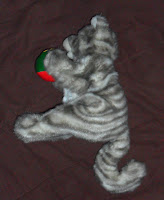 always looking well away from the cat. Catching the ball is the trickiest…hard enough to do with a puppet, but with a puppets and not looking takes a lot of practice. The author of book, by the way, is the amazing, the incredible Crosby Bonsall, who passed away in 1995. Her series of early reader mysteries are great, Mine's the Best is perfect for brand new readers, and Piggle....well, some day I'll have a post about that one, although I haven't done the story for several years.
Posted by steven at 9:01 PM