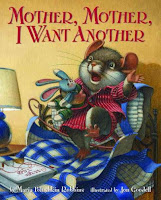 Puppets: 2 mice, plus 3-5 other animal puppets

Props: blanket or pillow for Baby Mouse (optional)
Presenters: one
Audience: Toddlers and Preschoolers
Video:  How to Tell Mother, Mother, I Want Another with Puppets

This gentle, funny story is a good one to adapt with puppets. You can play up the gentleness for younger audiences, like in Toddler Time, and get sillier with older, preschool age groups. When Baby Mouse says “Mother, mother, I want another,” his mom thinks he means another mother, when he really wants another kiss. This sets up the main action of the story: a series of other animals come and try to be “another mother” for Baby Mouse. Each one sings a silly little song, but Baby Mouse always ends up repeating the title refrain.

The songs are four lines that I just sing to the tune of “Twinkle Twinkle Little Star.” Mrs

. Duck sings “Quack, quack, mousie, / Don’t you fret, / I’ll bring you worms / Both fat and wet.” I tend to silly the songs up a bit: “Quack, quack, mousie, / Don’t wiggle and squirm, / Tomorrow you can eat / A bunch of worms.” You can use just about any puppets for the other mothers and make up rhymes pretty easily. Like for Mrs. Skunk: “Hush little mousie / All is well / Think of the nice things / There are to smell.” (turning her tail to him at the last line).

You can have some fun with the voices of the mother puppets, but no need to be too extreme with them....just a little croak to your voice with Mrs. Frog, a deeper voice for Mrs. Cow, that sort of thing. What they're doing is more important than how they sound in this case, so putting a lot of energy into unique voices is more distracting than helpful for this story.

When Baby Mouse finally explains what he really wants, each other mother returns to give him a kiss. Baby Mouse’s

reaction to each kiss is happy in the book, and that’s how I do it with toddlers. But for preschoolers, I usually have him react to the kiss more rudely: “Ick! I’ve been kissed by a frog!”…that sort of thing. The way Baby Mouse says the “Mother, mother, I want another” refrain can also vary by audience. With preschoolers, he can get more impatient with each one (shown by voice and by more motion, as inmoving towards the mothers while they move back), while with younger kids his response is more mild and consistent.

Finally Mrs. Mouse returns to give him the kiss he really wanted. And because the songs are such a part of the puppet story, I add one for Mrs. Mouse to end it: “I am your mom / And you don’t need another / You just wanted one more / Kiss from your mother.”

There’s a bit of puppet management to this one, since each mother tells the next one about Baby Mouse’s problem, then the new mother goes to see Baby Mouse. So I have the mother puppets split up on either side of me. And before each switch, Baby Mouse comes off the hand on rests on my lap. So Mrs. Mouse (right hand) leaves Baby Mouse (left hand, then lap). Mrs. Mouse meets Mrs. Duck (left hand). Mrs. Duck comes to Baby Mouse (right hand now). Mrs. Duck leaves, meets Mrs. Frog (right hand)…etc. Then you also have to return each mother to alternate sides when you take them off, so they’re easy to pick up when they return (in reverse order) for the kisses. Writte out, it looks way more complicated than it really is, but it is worth walking through with the puppets a time or two before telling.
Posted by steven at 10:42 AM 2 comments: 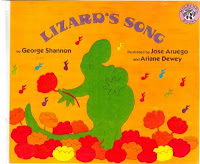 
I visited a summer daycamp last week that was studying “rocks” and wanted a puppet story or two. I don’t actually own any puppet rocks, but realized that two of my favorites each feature a rock, so they worked fine for the tie-in: Anansi and the Moss-Covered Rock which I'll feature soon,and George

Shannon’s Lizard’s Song which I'll do now: In this book, Lizard sings a song when he’s happy: “Zoli, zoli, zoli – zoli zoli zoli / Rock is my home – rock is my home…” Musical notation is in the back of the book, but since that means nothing to me I just make up my own little tune/chant...and it's pretty catchy. Lizard teaches the song to Bear, but Bear meets other animals and forgets it each time.

does in the book, I have him try to sing it, but get it mixed up with the song he just heard: “Zoli, zoli, quacky – quacky quacky zoli / Rock is my pond – pond is my rock.” This is pretty funny. And even funnier if Bear reacts after each mistake: “Zoli zoli quacky [Oh no!] – quacky quacky zoli [That’s not right] / Rock is my pond [son of a *#@&!].…” and so on (but just kidding about the swear words). My Bear puppet has arms you can move, so I’ll have him scratch his ear at the first mistake, cover his face with the second, and slap his head with the third. Those visual reactions are even funnier than the verbal piece.

Besides the songs and the humor, the characters have distinct personalities, so you can have fun with voices and the interactions between Lizard (happy and kind) and Bear (a bit pushy, kind of dopey, but nice in the end). As for the other animals, any will do….just use the sound they make and the place they live for the song.

For puppet-handling, when Bear leaves Lizard I take Lizard off and put him on a rock on a table, so then I can handle Bear and whoever he meets. I end up switching Bear from right hand to left hand a few times. He’s on my right hand when he meets Lizard. When he leaves Lizard to return to his den, I switch him to my left hand, heading right. He meets an animal, mixes up the song, and then heads back to Lizard, so I switch him to my right hand, moving left. It may sound like a lot of trouble, but it’s pretty intuitive and I think it makes the story flow smoother. Also, when Lizard first sings the song he does a simple little dance…moving up or down or side to side. So when the others sing, they should dance a bit too. So this isn't the simplest of stories to tell with puppets, but with a few run throughs to get the switches and actions worked out, it works really well.
Posted by steven at 10:35 PM No comments: 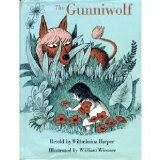 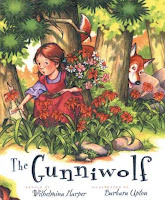 The Gunniwolf is one of those perfect-for-puppets stories, with chases, hide-and-peeks, distinct characters, funny sounds, and a song. So I’ve done it as a puppet story many times, with and without a stage. For our Family Storytime, though, Sheila and I decided to act it out. We tried to retain most of the best puppet-ish bits in some form without adding too much elaborate in terms of costumes or props. As Little Girl, Sheila put on a grass skirt and a flower head band and searched for flowers. I wore a wolf-hat created by Sheila that was a bit scary (teeth!) but not too much. Just to make sure I wasn’t too frightening for our young crowd, I put the hat on when we introduced the, so they wouldn’t be too surprised.

I love the way the scariness works in this tale. You can make it pretty scary if you want to, but you can manage that by adjusting the goofiness of the Gunniwolf. No matter how silly he is, though, there’s always some tension and the kids get really involved in warning the girl.

The simple tri-fold that we use for most of our stories served as the forest, especially after we put our cut-out tree in fron

t of it (another piece we use in a lot of stories). As the Gunniwolf, I peeked out a few times and the kids warned Little Girl (who didn’t listen of course), building up some suspense. That leads to: the Pop-Out, when Little Girl finally sees the Gunniwolf. This is exciting, since the kids knew it was coming but weren’t sure when, and because they’re not totally sure what will happen next. And it’s fun, because the Gunniwolf sounds kind of silly and Little Girl is scared, but in a funny way.

For the song, we included an extra gag that I do with the puppets: Gunniwolf tells Little Girl to sing, and she sings the wrong song each time: “Twinkle Twinkle,” “Jingle Bells,” etc., before finally singing the write way (“Kum-kwa, Khi-wa…”). Another added joke: each time Gunniwolf falls 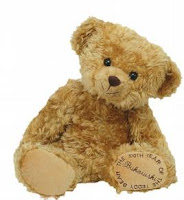 asleep to the song, he first dips behind the backdrop to get something: first a blankie, then a pillow, then a teddy bear. So a bit more silliness, leading into the chase, which brings back the suspense. We didn’t run around that much with the chases, but used the great refrain from the story (“Pit pat pit pat” goes Little Girl…”Hunker-cha, hunker-cha” goes Gunniwolf) to carry the drama. Just like with puppets, slowing down a chase scene usually works best, so we “run” almost in slow motion. It’s not the speed, it’s the anticipation that creates the suspense.

For the final chase, Little Girl makes it home and Gunniwolf is consoled by the fact that he now has learned the song and sings it himself in his very bad singing voice (at last, a singing performance that fits my musical talent level). And Little Girl says she’ll obey Mother from now on…probably.
Posted by steven at 12:17 PM 1 comment: