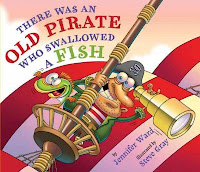 For a pirate-themed Family Storytime Sheila and I decided to do this reworking of "There Was an Old Lady Who Swallowed a Fly" using puppets, props, and a puppet stage.  Sheila was in front of the stage managing props and leading the song.  I was behind with a pirate puppet. 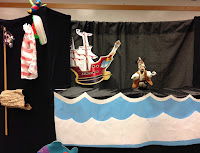 We adapted the book a bit, reducing the number of items that the Pirate swallows and playing around with the rhymes a bit.  We started out with all of the props velcroed to the side of the stage, which worked well:  they were handy for Sheila to grab, plus it led the audience to anticipate what would be next.  We sort of traded off with the telling/singing of the story.  I would start off with  "I am an old pirate, I swallowed a.....Fish!"  Then Sheila takes the Fish, holds it above the pirate puppet, and slowly lowers it into the puppet's mouth.  The pirate turns to face away from the audience so that it kind of looks like he's really swallowing it. 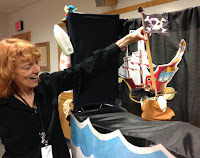 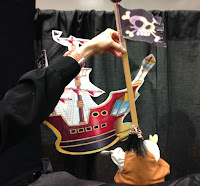 We didn't worry too much about having perfectly matched props.  The Map was a rolled up drawn paper map;  the Sail was fabric that Sheila decorated.  The Mast was a fun one, because it was so long.  In the book, the Boat is an actual pirate ship, but our simple plastic toy boat worked fine.  As Sheila put the props down the Pirate's throat (or pretended too) I would catch them with my off hand so they wouldn't crash to the ground.  Or at least I mostly did:  I missed the boat once and it was pretty loud. 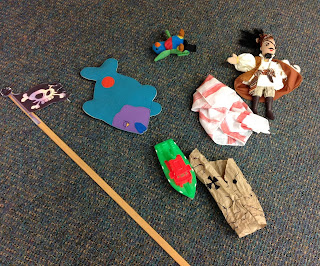 At the end of the story, the Pirate sinks to the bottom of the sea.  So I sang that verse and slowly brought the Pirate out of sight and turned on the bubble machine from behind the stage.  It always seems to be tricky to get the timing of a bubble machine just right.  Sometimes they start up right away, sometimes it takes a bit.  But for the most part this effect worked well and the kids got the idea.  We also had a bubble sound effect that started with the click of a PowerPoint slide.  Well, two out of four times it started...not sure why it didn't work the other times.

It's nice to add effects like that, but also good to not make them crucial to the success of the story.  We can live with the bubbles being a bit late, but the Pirate puppet, the props, and the telling are what really make it work, and we were four for four with getting those mostly right.

We originally thought of doing this as an act-out, with one of us as the pirate stuffing the props into an over-sized shirt, but in the end I think the puppet stage version worked more neatly than the people version would have.

Posted by steven at 9:25 PM No comments: 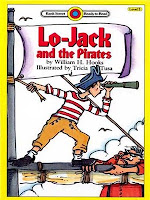 We do a Pirate-themed Family Storytime every year, but it's been a Terri/Brad presentation for several years.  This time Sheila and I took a turn, and I thought back to my first pirate event, which was probably 20 years ago, and a book that's out of print now but was one of the few pirate early readers on the shelves back then.  Lo-Jack and the Pirates is sort of like Amelia Bedelia:  Lo-Jack is hijacked to be a pirate's cabin boy and gets everything wrong.  The book is great for 1st and 2nd graders, but younger kids miss some of the puns, so we simplified a bit for our mostly-preschool audiences and acted it out with a few props. 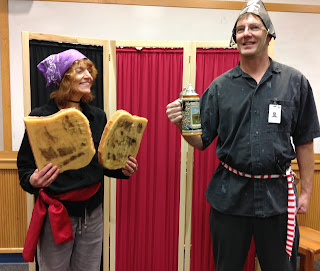 I was Captain Grimm, and basically I try to teach Lo-Jack some pirate stuff and she gets it wrong:

Pirate lingo:  "Pirates say aye-aye!":   Lo-Jack holds two goofy looking cut out "eyes."  Get it?  Most of the kids did, though not all.

Pirate jobs:  "You can be a look out and shout "ahoy" when you see land.:   Lo-Jack steps on a stool, looks at the audience and shouts "a boy!" while pointing at one of the kids. 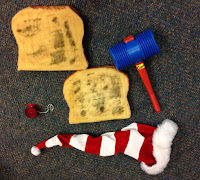 And of course with each mistake Captain Grimm gets more impatient.  When he says "Blow me down!", Lo-Jack tries to blow him over; Captain G. says he's too small to blow down a mighty pirate, so Lo-Jack grabs a squeaky hammer and bops him.  When the Captain says it's time to Loot and Pillage the people in the audience, Lo-Jack convinces him that they are nice people and they shouldn't do that.

So Captain Grimm turns nice and the story ends with C. G. proposing a Toast to Lo-Jack, which is when Lo-Jack grabs a couple of pieces of toast.

The humor really worked just fine for the audience.  For those who maybe didn't get the verbal humor, there was enough going on visually with the props and people that it was still funny.  Like maybe a three year old doesn't register that Lo-Jack got "yo ho" mixed up with "yo yo" because they sound the same, but knows that pirates don't play with yo yos, and that's pretty funny anyway.

Click here for a short, not-well-edited video clip we did as a sample.

Posted by steven at 6:21 PM No comments:

The Chocolate Chip Ghost (and other colors) 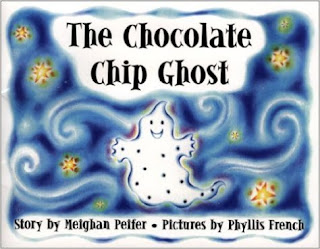 I keep trying to get back to this blog, and my motivation this time is to get in a good Halloween story before the holiday happens.  This a favorite among pre-school teachers and librarians, but not everyone knows it.  I've pretty sure that I've  never actually seen the book:  I learned it as a felt board story from someone years ago.  I don't do many stories with felt, mostly because I'm so completely unskilled at scissors, patterns, and just general crafty creativity.  But these shapes are even simple enough for me.  You just cut out five small ghosts and one big one.  I made the big one into a simple flat puppet, but it works fine as just a felt shape. 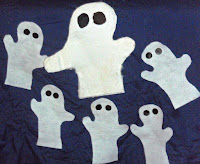 Then you tell the story, which is basically this: 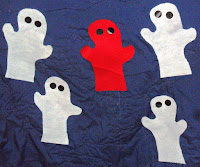 Mother Ghost goes to the store to get some food.  She tells her five little ghosts not to have anything but milk when she's gone.  One by one, each ghost goes to the fridge and gets something that's not milk, but something with a distinct color.  Ghost one gets a tomato.  [pick her up and bring her behind the felt board; show the tomato].  And when she came back, she was......red!  [switch white ghost for red ghost and put that one back on the board].

Then then next three ghosts do the same thing, with different colors and different fruits or vegetables.  Play food or real food both work fine.

That simple anticipation and guessing game, where the kids guess what the ghost will eat and what color she'll turn to, along with the satisfying visual image of that brightly colored ghost, works just great.  Similar in effect to doing Pete the Cat: I Love My Red Shoes with colored shoes.

Then there's a neat twist at the end, when the last little ghost finds the refrigerator empty, so she looks in the freezer.  I usually let the kids know that she found some ice cream, ask them to guess what flavor, then show the decorated ghost and they all get that it was chocolate chip ice cream. 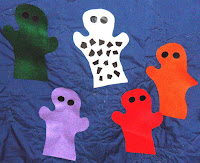 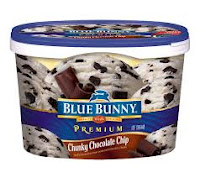 For the food props, you can use real food, toy food, or if you don't have either, just print out a picture. Actually pictures might work even better because you can stick them to the board, though I've never tried it that way.

The humor and surprises in this story are right on target for two and three year olds, but it's also engaging enough for ones and surprisingly fascinating to four and five year olds as well.  And for toddlers it's has just the right level of Halloweenishness, with the least scary ghosts ever.

Posted by steven at 9:58 PM No comments: