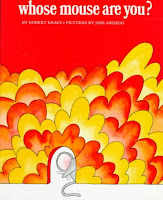 Book:  Whose Mouse are You  by Robert Kraus, Illustrated by Jose Aruego
Puppets:  Mouse, Mother Mouse, Father Mouse, Sister Mouse, Baby Mouse;  Cat
Props:  Basket (or something else for a Trap);  Car (or something else for Sister to travel Far From Home in)
Presenters:  One
Audience:   Toddler Time  (ones and twos), Preschoolers
Video:  How to Tell Whose Mouse are You? with Puppets

This is one of the first books I did with puppets and props, way back when I first started Toddler Times in 1990 or so.  And still a favorite.  The question and answer format of the text seems a little abstract for ones and twos, but they always seem to get it just fine, and I follow the words from the book pretty much exactly.  I especially like the slightly formal phrasing of the refrain: “what of your Father?...”

I kind of draw out Little Mouse’s response, which heightens the suspense a bit plus gives me time to pull out the puppets and props:  “My Mother?  My mother?  [Pull out Mother Mouse]  My mother is…….Caught by a cat!” [Pull out Cat puppet and have her pounce (but not too menacingly) on top of Mother Mouse].  Shake head sadly and ask:  “What of your father?...”

For this story I place puppets and props on a table rather than stuffing them back into a bag after they appear.  So eventually you’ve got Mother under the cat, Father inside trap (a basket, bowl, or anything traplike), and Sister far from home (in a toy car) all lined up on the table.

At which point the story turns around in a way that’s very satisfying to two year olds:  Little Mouse saves each one.  I have him first declare what he’ll do:  “I’ll save my mother from the cat!” and then show him doing it.  It’s best to go slow with the puppet actions so the very young kids can process it and fully enjoy the sight of Little Mouse pulling Fother out of that trap and tossing that Cat into the air.

It ends with "Now whose mouse are you?," and Little Mouse lists off his family members, much hapier now.  And there's a very pleasing added twist:  "I'm my brother's mouse!"  Confused Narrator asks:  "Your brother's mouse?!" (because earlier Mouse had said "I have none.")  But now Little Mouse repeats:  "My brother's Mouse!......He's brand new!"  And you pull out your cute little finger puppet mouse (or whatever smallish mouse you can find).

As a storyteller, tone of voice goes a long way in this story, and you can be pretty broad with them:  worried when Mouse describes his family’s perils; triumphant when he rescues them; pleased when they’re safe; and surprised with Little Brother pops out.  Although it’s a story with puppets, I really think it’s the storytelling that makes it work.  And it’s always fun to notice how strongly even very young children respond to the voices and facial expressions of a storyteller.

We’re on a six week programming break at my library, hence the reduced number of posts here.  But we start up full speed in mid-September, which means more frequent posts soon… 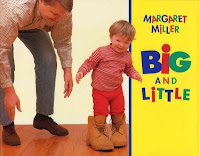 Props: Any pairs of things you have around to show size differences
Presenters: One
Audience: Toddler Time (ones and twos)


Many of Margaret Miller’s photo books work well with a Toddler Story Time, and this one shows the concept of b 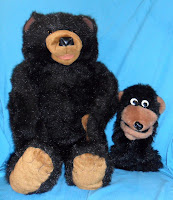 ig and little very clearly. If I were reading it one on one, I’d stop and ask questions and talk about the pictures with a child, but in a Toddler Story Time presentation, I mostly stick to the words. After the last page, though, there’s a great opportunity to continue and expand on the concept by doing a Follow-Up with puppets. After the book I just go to the bag and say, “let’s see if we have some big and little animals in here.” And pull out samples.

I’ll start with a couple of obvious size contrasts, like Big Bear and Little Bear. Then get 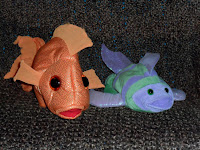 a little trickier: Big Fish and Little Fish are closer in size, but the difference is still clear enough for two year olds to see it. So I’ll pull out one Fish and say: “Do you think this is the Big Fish or the Little Fish?” Getting in the idea that size is relative, but in a playful way. I interact with the kids much more with the puppets than I did with the books.

Then I’ll try a couple other variations, like three sizes: Little Frog, Big Frog, and then add Bigger Frog. Another fun one is to do a Big and a Little, then one

that’s Identical, like these Turtles. I use mostly puppets for this, because I'm a puppet guy and I seem to have a lot of them.   But I also like to throw in a non-puppet pair. Doing a board book (Small) next to a picture book version of the same title (Big) is fun.  But really any objects similar in name but different in size work.  The idea of taking a concept from a book and playing with it with whatever stuff you have around is a great model for parents and caregivers, and it’s one they can do so easily at home, with or without puppets.
Posted by steven at 10:29 PM No comments:

Catching Armadillos, Putting Them on Pillows

Here’s an easy puppets & props story where you mostly just have to pull stuff out of a bag or box.  If the group doesn’t know the song, it’s simple to learn, and it works well to have them all sing “A hunting we will go, a hunting we will go, we’ll catch a….”  And then they stop and wait to see what puppet you pop out.  “…Cat!”  And put him in a “…Hat!...And then we’ll let him go.”  Then after that dramatic sequence, where the words and actions are the teller’s, they naturally re-join you in another verse of the song.

I like the way the rhymes work with different ages.  In Toddler Time (where I used it last week), the ones and twos just about never guess what object will complete the rhyme, though you can often see the grown-ups whispering it to them.  But I know they do hear the rhyme, even if they can’t yet predict it.  With Preschool Storytime, on the other hand, the kids often do guess, with varied levels of correctness, but almost always with strong evidence of imagination and involvement.

As for which puppets and objects to use, I like to mix in simple ones with others that are more surprising.  Cat – Hat and Fox – Box are fine.  Pig – Wig can be pretty funny.  I’ve had fun with extending the –og rhyme:   “…catch a Frog and put him on a Hog…and put them on a Dog…and put them all on a Log.”  They puppet holding/stacking gets a little messy, but still fun.  Cat/Rat/Bat/Hat can be done the same way, but I’d only use an extension once.

With the Toddlers I did another favorite:   “…we’ll catch a….Ball?”  And then I pull out my cool Armadillo puppet, which rolls and velcros into a shelled ball.  I toss him around a bit and then:  “Wait a minute…this isn’t a ball!”  And unroll him to reveal “…an Armadillo…and put him on a Pillow.”  I usually like to close with “Bear…and put him in Underwear…” which gets the automatic laugh that the word always earns, even with two year olds.

Another variation is to make the catching of the animals part of the fun.  I tried using a net once, but decided to drop the idea.  It was fun for the kids to watch as I nabbed the animal in a big red net, sometimes after a near miss or two.  On the other hand, it’s awkward to get the animal out of the net, put the net aside (where the kids won’t be tempted to come up and try it out themselves), and then pull out the appropriate rhyming prop.  In other words, the net stole the show and detracted from the normally satisfying rhythmic, rhyming sequence.  So instead I just do a little playing around with catching the animal with my hand, doing the near miss thing one time, making the animal hide and asking “where’d he go?” another time…and doing the others just straight.

Because the song is so easy to learn and remember, I usually encourage the grown-up to try it at home, and remind them that although it’s fun with props, just singing the song works great too, developing phonological awareness and challenging the child’s imagination.
Posted by steven at 10:07 PM No comments: