When I first started doing Toddler Times in the late 80’s, there really weren’t all that many books that were just right for 1 and 2 year olds.  This was one of them, and it still works great as a book.  It also works very well as a pretty simple puppet story. 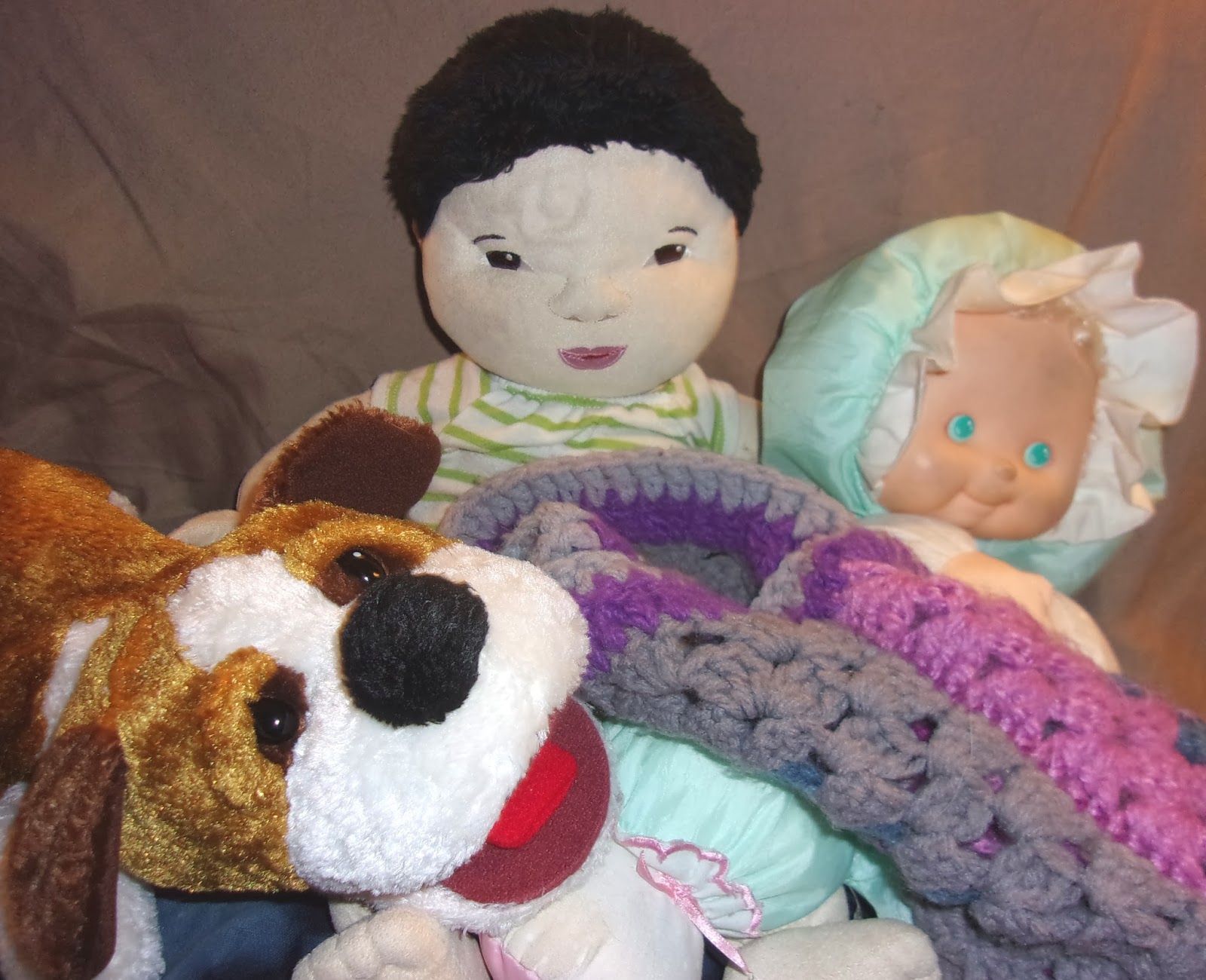 I leave a few beats of silence after the second “back and forth, then I pop Michael up from my lap and he says:  “Let’s get Dolly!”  I pull the Doll out of my puppet bag and narrate again:  “Now Michael and Dolly were on Mother’s lap, and they rocked back and forth, back and forth.”   And the pattern repeats, with Michael popping up to get something new each time.  In the book it’s Puppy, Boat,and Blanket, though other items could be substituted.   There’s a real nice storytelling rhythm to the tale, moving neatly from the quiet interaction of rocking, to Michael popping up, to a surprise item from the bag, and back to the rocking.  I try to keep Michael’s explanations fairly restrained and not play up the “what’s in the bag?” part too much.  You could make his reactions more extreme and emotional, but better to keep with the gentle tone of the story I think.

The twist comes when it’s Mother who mentions someone who needs to be on her lap, and it’s Baby.  This time Michael pops off her (my) lap, looks at Baby, looks at Mother, and sadly says:  “There isn’t room.”  Then Mother calmly gathers everyone onto her lap and ends the story with the very reassuring line that “there’s always room on Mother’s lap.”

That theme, along with the new sibling rivalry that leads to it, is a universal one that resonates most families.  My props don't match the words as well as I wish, but I don't change the words, calling it a "reindeer blanket" even though it doesn't have reindeer on it and "canoe" even though it's obviously a different kind of boat.  The words lend some of the cultural specificity in the book, and of course the theme and the actions that lead up to it are universal.  And ideally the puppet version leads families to check out an excellent, but sometimes overlooked book (and it's still in print!).
Posted by steven at 8:12 PM No comments:

I Made a Mistake, But At Least It Rhymed 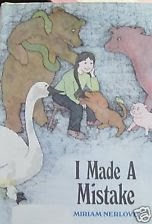 Book:  I Made a Mistake  by Miriam Nerlove

Here's one of those books that worked very well in print form, but now it's out of print and almost 30 years old, so puppets are one way to keep it going.  And it's among the simplest puppet tales around, so a great choice if you haven't used them much.  It's based on an old jump rope rhyme and sort of a relative of Old Mother Hubbard, with mistakes and rhymes:  "I went to the bathroom to brush my hair. / I made a mistake and brushed my bear."  That's basically it, with a series of about a dozen verses, with a sensible every day activity in the first line, and a a nonsensical mistake involving an animal in the second line.  So if you've got a handful of animal puppets, you're set.

My first time with this I'm pretty sure I assembled all of the props for the first half and used them.  So I took out a brush on the first line, then popped a Bear puppet out of the bag to complete the rhyme.  And that works fine for the first verse, and for a few others, but once you get to "heater" (for Cheetah) and "sit on the lawn" (for Swan), the whole thing just gets too prop-heavy and difficult.  So I drop all props for the first line
and just go with the animal puppets.  Much less confusing for all of us.

I just say the first line, then after "I made a mistake and brushed...." there's a little hesitation as you reach into the bag and bring out  "...a Bear!"  By the time you start the second verse, which in my version is "I went to the laundry to wash my socks. / I made a mistake and washed....a Fox!" the kids have picked up the pattern.  And they've also heard the rhyme, even if they're not conscious of it.  The story works because of the anticipation of "pop-out," so hesitating a bit, maybe seeing if they can guess based on the rhyme (toddlers usually can't, though), heightens the engagement of the kids.

Since I use this in Toddler Time, I don't go with a full dozen rhymes.  I pick about six, based on the puppets I have around and the rhymes that are the most fun.  And it's fine to add your own rhymes that aren't in the book...that's the way jump rope rhymes work anyway.  For example, I always like the chance to use my Armadillo puppet, so I added "I went to by bed to fluff up my pillow / I made a mistake..."   And for similar reasons I appreciate one rhyme that is from the book ("went to the heater.../...sat by a Cheetah") because I have a very cool, but under used, Cheetah puppet.

One more minor adaptation for presenting with puppets is the ending.  The final verse wraps it up nicely:  "I went next door to find my friend / I made a mistake and found...The End!"  So for that one I print "The End" on a letter sized page and pull that out of the bag, which is a nice minor twist to finish with.

Bear, Moon, Hat, and an Echo

Here's one that I like to do in Toddler Time, even though I know deep down it's more of a preschool story.  So when I tell it with puppets and props I make sure to do some stuff before the story starts so the group can follow it pretty well.  Bear's voice echoing is a key plot element, and lots of kids don't know what that means, so I prep them.  I tell them about how if you say something loudly, sometimes the sound can bounce off of a wall or a mountain and you can hear it again.  Then I have them practice.  My Bear puppet says "Hello!" to them, and they say it back as a group.  We try it a couple times and they pick it up pretty quickly.

Then it's on to the story, which is as much storytelling-with-props as it is puppetry.  I pare it down to the basics.  Bear wonders when Moon's birthday is, decides to ask him, and climbs a mountain to get closer.  I hold up Moon in one hand (using a big styrofoam ball, but any big white ball would work).  Bear shouts:  "Hello!" and then I prompt the audience:  "...and the echo came back.  Ready...?"  And they all join in with the echoing:  "Hello!"

Then I have Bear react to that echo, this time addressing the audience:  "Wow!  Moon said 'hello' to me!"  So Bear alternates between calling up to Moon, with the echo coming back, and sharing his reaction with the audience.  Bear's calls to Moon are in a slightly different voice, more drawn out, and that helps to cue the audience that their turn to echo is about to come.

Once Bear learns that Moon wants a hat (which is just what Bear wants....this is such a cleverly conceived story!), he gets one and leaves it on a tree for Moon.  I've done this
using a big tall plant as the tree, but eventually just went to holding my arm straight up with that hat on it, and that works just as well and is much easier.  I take Bear off my hand to bring Moon up across the sky, "freezing" Moon when it's just below the hat.  I'm narrating this part, rather than talking as Bear, to make it clear:  "The Moon moved across the sky, until it looked like it was just underneath the hat."  And then back to Bear reacting:  "Wow!  The hat fits!"

I know some of the kids are really not getting this exploration of relative positioning and visual illusion, but I think enough of them get the general idea, and anyway it looks pretty interesting.  I like to this one because the storytelling is so excellent and the audience participation is fun, but you can also get a ton of STEM points for this one if you need them.

This is one of the stories which also has a link to my "Storytelling with Puppets" youtube page.  Often those videos show a way of telling that's different from the blog description here, but in this case the Happy Birthday Moon video shows this same approach described above....

Posted by steven at 9:42 PM No comments: