I've uploaded seven more videos to my "Storytelling with Puppets" YouTube channel.  The stories are:

All the videos are on the YouTube page, but here's a sample:   "Silly Sally" by Audrey Wood

Monkey Meets a Bunch of Other Guys 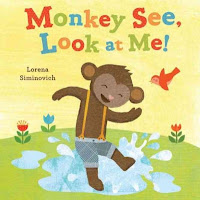 Book:  Monkey See, Look at Me  by Lorena Siminovich
Puppets:  Monkey, Bird, Rabbit, Lion, Elephant (substitutes could work for all but Monkey)
Props:  None
Presenters:  One
Audience:  Toddler Time  (1's and 2's)
I often wish there was a way to do this search in a library catalog:   “Picture books where one guy meets a bunch of other guys one after another.” (like Ask Mr. Bear, The Fat Cat, etc.) Also "Picture books where one guy meets another, then that guy meets another guy, and so on..." (that's the Jump Frog Jump, Big Fat Worm model).  Because those can be the best books for telling with puppets.  They're easy to adapt, never require more than two characters at a time, and have those strong patterns that make them very accessible to young listeners.
But I don't see either description listed in my big red LC Subject Headings books (actually I don't even see those books...do they even make those any more?), so I try to keep an eye out for both structures, which led me to notice Monkey See, Look at Me on the new Picture Book 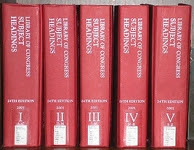 shelves.  In this one it's Monkey who meets various animals, always right after he’s pretended to be that animal.  So, with a few adjustments for Toddler Time presentation, the puppet progression is pretty clear:
Monkey tells the kids he’s pretending to be a bird and pretends to fly (“Look at me, I can fly…I’m a bird!” is the repeated pattern). Then Bird pops up from the puppet bag and shows him how to really fly…and flies away.  The same pattern follows with Rabbit / Hopping, Lion / Roaring, and Elephant / Stomping (in the book Elephant splatters and splashes, but it’s easier to show stomping with puppets).  It's not that dramatic and would probably be kind of boring for preschoolers, but for the 1's and 2's in Toddler Time it's just the right level. 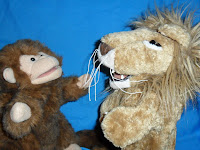 With puppets, I try to amp up the silliness of Monkey’s attempts a bit.  For flying:  he jumps a couple times, takes off, freezes in mid-air, and crashes.  His hops barely get him off the ground and his roar is almost a whisper.   I also have Monkey continuing his animal imitations for a while after the animal comes out, so Rabbit sees him hopping and Monkey doesn't notice right away, adding just a bit more humor.  These antics are fun to watch, give Monkey a bit of personality, and also contrast more blatantly with the real animals, all of which works well with toddlers.

The book ends with all four animals pretending to be monkeys by swinging.  That messed with my whole “only-two-hands” limitation, so I changed it a bit and had each animal reappear and do a different Monkey-like thing.  So Bird says “Look at me, I can eat a banana…I’m a monkey!”  Rabbit climbs a tree; Lion swings; and Elephant scratches.  That way they all appear one at a time and the idea of them imitating Monkey the way he imitated them is reinforced.
Monkey’s response to their imitations wraps up the story nicely:  “I’m silly.  I’m a monkey,”which echoes the response each of the animals had given him earlier.  A nice, containable, fairly easy to manage puppet story...and if we just had a couple good new subject headings I know there are more like this out there...