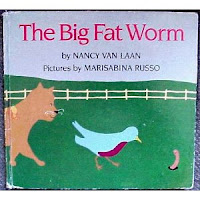 This book has been out of print for a while, and at first glance that doesn’t seem like a big deal: pictures are plain and simple, words are repetitive, and the story is predictable. But when you share it with kids, all of the virtues come through: rhythmic language, playful characters, and a very satisfying circularity. The book also worked great for beginning readers too. But although the book isn’t in print (A new paperback runs about $50 on Amazon) the story can live on with puppets. You only need a few, and it’s an easy one to tell even if you haven’t used puppets a lot. The words are mostly directly from Van Laan, but easy to remember:


The exact same pattern of words repeats, but now with the cat threatening the bird, who flies away. Then it’s a dog threatening the cat. Finally they all go back home and the bird spots “something big, something fat, something round. And the big fat worm popped out of the ground. And the big fat bird said ‘Hi worm.’” The sing-song rhythm of the words and the tight pattern makes this an easy story for very young kids to hold in their heads, and they totally get it when it all starts over again at the end.

The puppetry piece is easy and fun. I just use my finger for the worm, plus a bird, cat, and dog puppet. With the dialogue, the speaking puppet moves towards the other. Then on the reply th 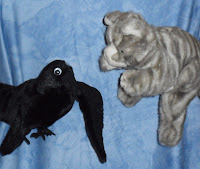 e motion reverses. So at “Hi worm!” and “I’m going to eat you up,” Bird is a bit higher and moving towards back-pedaling Worm. But at “Hi bird!” and “Oh no, you’re not,” Worm gets the upper hand, so moves higher and towards back-pedaling Bird. The puppet motions visually replicate the give and take of the conversations, so it really works neatly. A quick bit of chasing, or jumping towards (but just missing) the prey at the end of each segment adds a bit more fun action.

I’ve used this often with Toddler Storytimes: it’s one of those where the story elements are simple enough for a two-year-old to completely comprehend, but also active enough to be very involving. It also works fine with preschoolers, though with that group I usually tack on one more animal to add a bit of silliness: “along came a big fat…elephant!” It’s also a great story for narrative skills; you can tell it once and kids can remember the basics of the story well enough to tell it themselves.
Posted by steven at 6:05 PM