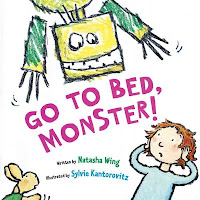 Equipment: Scanner, Projector, White Board, Microphone
Props: Water and Glass
Presenters: Two
Audience: Family Storytime (mostly 3-6 years)
Terri and I did this story as part of our “Bedtime” Family Storytime, but the adaptation was developed a year ago, mostly by Brad with input from Terri, we think (with collaboration sometimes it’s hard to sort out). This was a fun and sort of different experience for me. I had no part in developing the story, just stepped in to a set role…and had a great time. In the story, a Girl draws a picture that turns into a Monster (who’s more silly than scary). She tries to put the Monster to bed, but he keeps coming up with excuses, until finally she reads him a book.

We brought it to life using projections of illustrations, drawings, and sound effects. First Terri, as the Girl, draws the Monster on our big white board. Then the scanned Monster appears, projected right next to her drawing. Terri interacts with the Monster on the screen. Monster makes growling, grunting sounds, which is me offstage and behind a screen, very close to the microphone. When the Girl says “go to bed, Monster,” Monster has an excuse each time. He says “CHASE;” we project that scene of the monster from the book; and Terri runs around as if it’s a game of tag. She draws a bed, hoping to get him to sleep; and then it’s: “HUNGRY!” with a new scan of Monster. Terri draws food, and Monster makes munching sounds. I get to burp into the microphone to finish that segment. * [for more on burping, see below]

So there’s this neat interplay of drawing, projected images, monster sounds, and the girl interacting with words and action. We use our whole big whiteboard to display each image of Monster, so they stay up there in sequence, rather than one disappearing when the next one arrives. Brad carefully spaced out the images to fit the screen area and to leave room for the drawings in between.

The highlight (for me at least) is when Monster’s excuse is: “POTTY!” So we project that illustration with Monster squatting; Terri draws a toilet in the proper place; and I dribble water into a glass while holding the microphone close up to make that familiar sound. I couldn’t see the audience, but it was fun to listen as they gradually realized that yes, that is the sound they’re hearing. As the Girl, Terri finally picks up a copy of Goodnight Moon, begins reading, and Monster snores.

I never would have come up with this myself, but I hope that seeing it work will open my imagination to creative possibilities like this. It’s very energizing to mix presentation forms within one story, and this book was a just right candidate for this kind of adaptation. When Terri first described it to me it didn’t really make sense, but once I saw the projected images it all came together. So I hope the description above is complete enough…if not leave a comment and I’ll try more. Other stories from this "Bedtime" theme: That Rabbit Belongs to Emily Brown and The Squeaky Door.

* I remember that as a kid of 7 or so, learning to burp at will seemed like a pretty important skill to have, and I took the opportunity to hone that talent and display it fairly frequently. What I don’t recall is anyone besides Joey, my best friend who taught me the trick (or did I teach him?...as I said above, with collaboration it all gets blurred) being suitably impressed. And I definitely don’t remember anyone saying, “you keep that up Steven, it will be a valuable skill in the workplace someday.” Despite that lack of encouragement, I carried on, and last week I reaped the rewards once again. Plus...I get another chance this week: I’m doing Yertle the Turtle.
Posted by steven at 10:51 PM