The Squeaky Door with two people 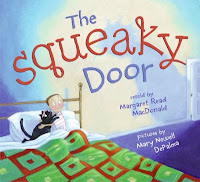 I heard Laura Simms tell “The Squeaky Door” on one of her tapes 20 or so years ago and have told it in various ways ever since. Mostly I’ve done it with puppets. In the story, a little boy is scared of the squeaky door at his grandma’s house and each time he calls for her she brings an animal in to sleep with him: cat, then dog, then horse (or whatever I decide to add). So there’s really not a lot of puppetry involved, just adding them on top of each other. The real strength of the story is the strong pattern which easily elicits participation from the kids and the fun interplay between Grandma and the Little Boy. There are great refrains: the boy saying “Oh, no! Not meeeee!” each time Grandma asks if he’ll be scared; and Grandma’s increasingly harried “You’re driving me crazy!” each time he calls out again.

For our “Bedtime” Family Storytime, Terri and I decided to act it out, and the story’s a natural for that too. But it surprised me how it took a little more development than I thought it would. I told Terri how I’ve told it, then we both looked at the picture book version by Margaret Read MacDonald. Her telling is great, and as you would expect from her, especially good for adapting as an oral story. But there were a few minor changes from the way I learned it. Which meant that when Terri and I came together to practice it, we had a few of MRM’s elements in there. I thought that would be fine and I could easily adapt, but no. I discovered that I was so set on my way that even the small changes never felt quite right. We finally got it together when Terri suggested we just both use the words I’ve always used, since it was a new story to her. That finally worked and we were able to have fun with the tale. It was still a bit different from the way I’ve done it. Terri played around with the puppets from behind the backdrop, which was a fun touch, and she has a great way of being “in” the story, but at the same time sharing asides with the grown-ups in the audience, kind of bringing them into the Grandma’s point of view, as if to say: “we’ve all been driven crazy by our kids, haven’t we?”

We used a cat and dog puppet for the first two animals, then brought in a huge stuffed frog for the last one (which breaks the bed). Grandma's tool box and a can of WD-40 were the only other props we needed.

We repeat the same storytime four times in a week, which means you get it just right by the third time usually. But sometimes by the time the last one rolls around you’re a little tired of it. So we decided to switch roles with this story for our fourth performance. I’m not sure if it was better or worse for the audience with me as Grandpa and Terri as Little Girl, but it was a nice change of pace for the tellers.

We also shared That Rabbit Belongs to Emily Brown and Go to Bed, Monster during our Bedtime Storytime.
Posted by steven at 10:23 PM