Book:  What Do You Do with a Tail Like This 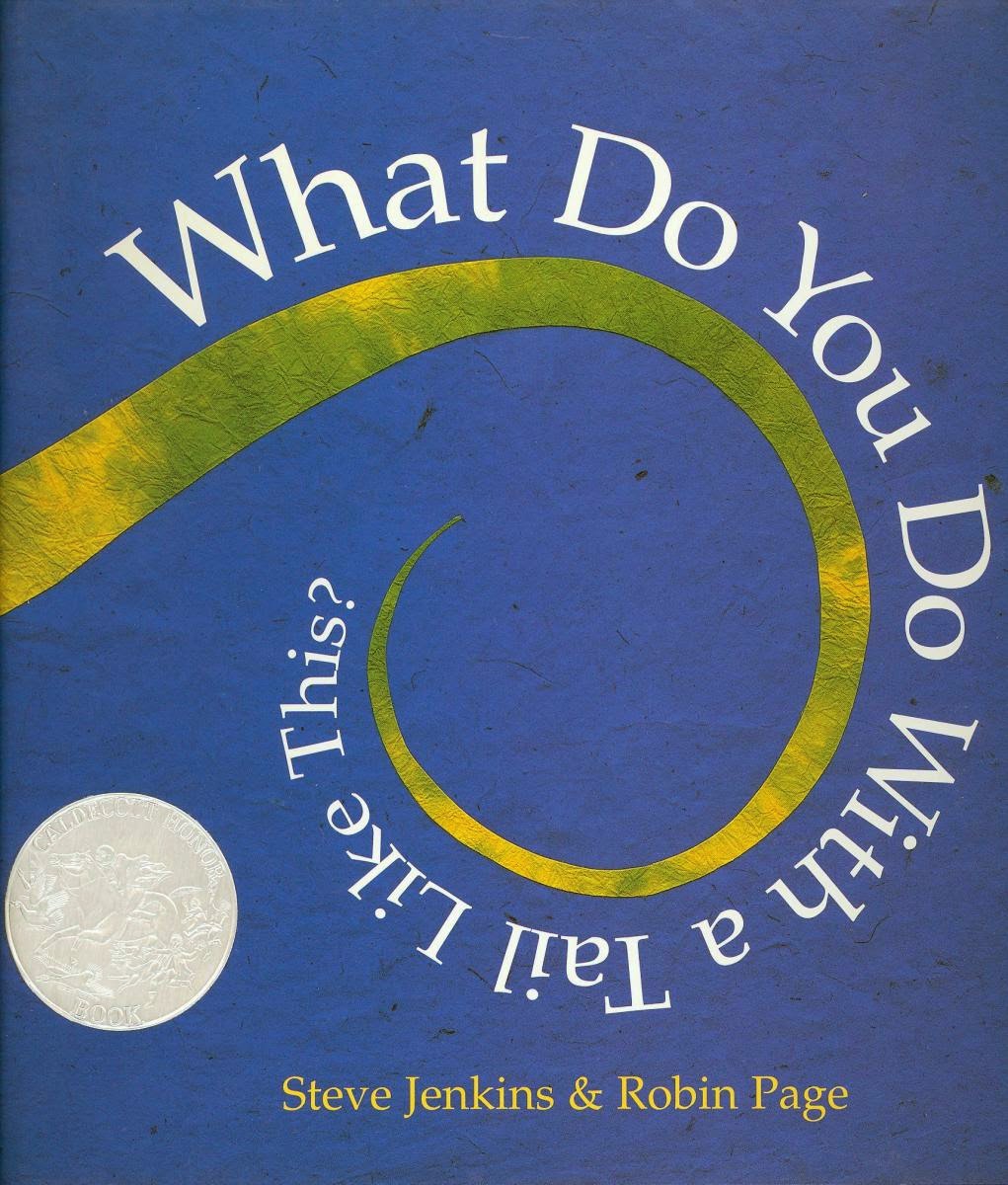 We've been doing our "K-2 Book Adventure" program for four years now, so we're able to repeat themes we've used a couple years ago, which saves a bunch of time.  We rarely repeat the program exactly, though, because it's just a little more fun if you add at least one new thing.  For the 2014 version of our "Caldecott Celebration"  (we also did it in 2012), we wanted to add a non-fiction book to the mix.  The obvious choice was Locomotive, the 2014 Medal book, but it's still too popular: we need to have at least 8 or 10 copies available for checkout.  So we decided on the 2004 Caldecott Honor book, What Do You Do with a Tail Like This?

Since the illustrations are so excellent, we scanned selected images and projected them.  We also wanted to convey the clever design of the book, but also make it work well for a large group.   A two page spread shows five tails neatly arranged.  So we showed that, then added an arrow that would point to each tail as we clicked: 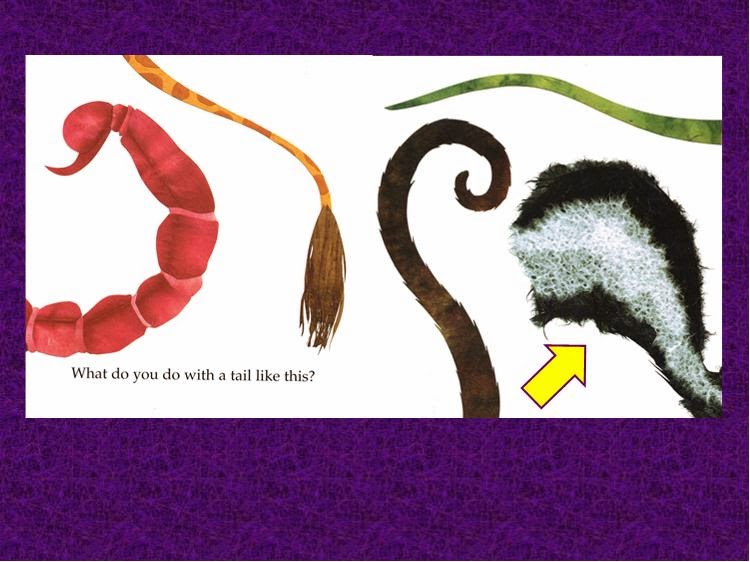 We asked the kids to identify the tail, and of course K's, 1's, and 2's did that pretty easily.  We had a few "snake" for the "lizard" (actually a skink, but we accept lizard) and one or two "lobsters" for "scorpion," but most got them right.  Then we click again to show the tail image again, opposite the illustration from the following page which shows the animal using its tail with a brief explanation: 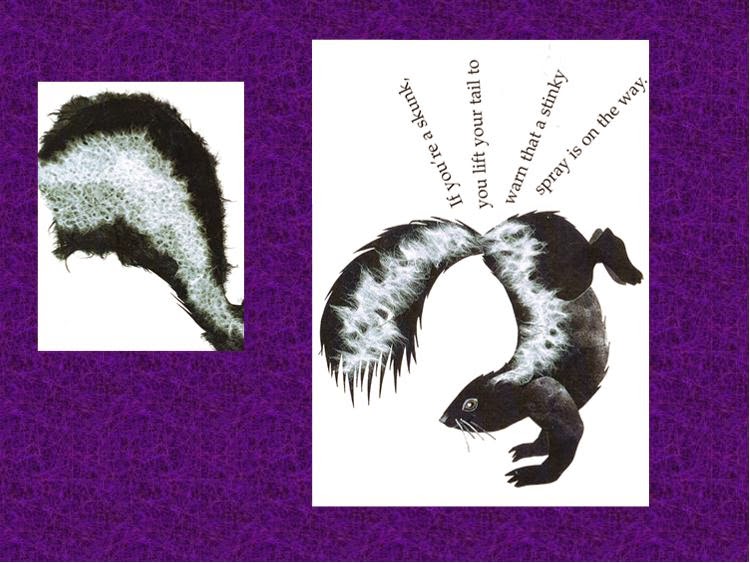 We did that for all five "tail" examples.  Again most kids were able to guess the purpose of the animal tails, but that's not a bad thing with a group presentation of a book like this.  They get to show how much they know, but at the same time the book is intriguing enough that they still want to check it out.  And most (but not all) were stumped by the skink, whose tail breaks off, then later can grow back.

After going through this pattern with all five tails, we clicked to a page from the back matter, where Jenkins & Page provide more details about each animal: 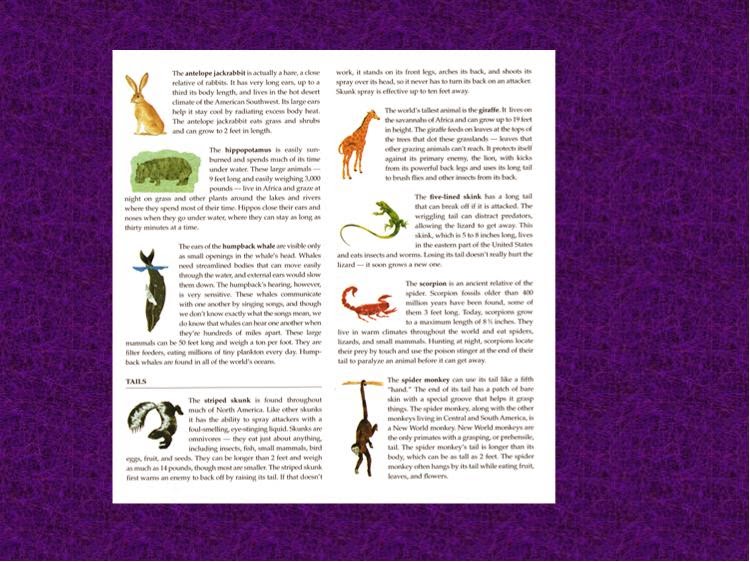 It would be fun to go through the whole book this way, but we were using more of a booktalk approach, showing them just enough about it to get them hooked, but leaving plenty more for them to discover when they check out the book.  So we ended by just telling them that "tails aren't the only thing this book is about....for example:  What do you do with feet like these?: 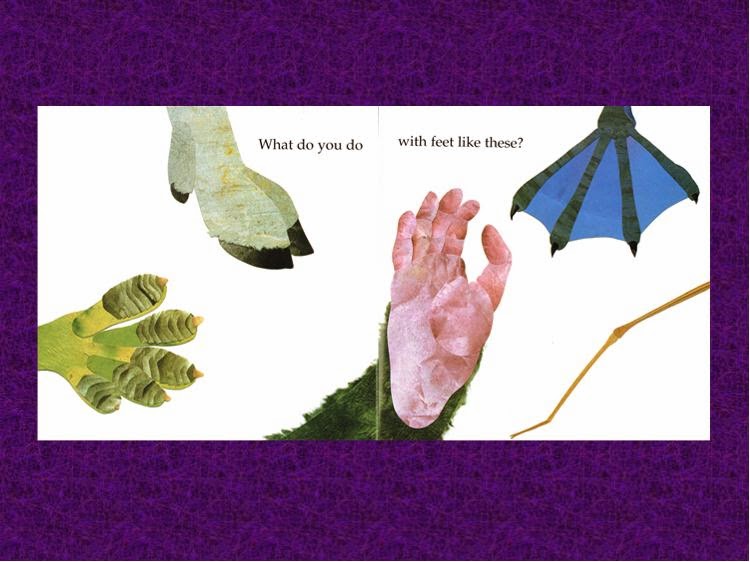 And that's where we ended it.  It was a fun and easy booktalk to do, and successful:  all twelve copies got checked out, so it did just as well as This is Not My Hat, A Ball for Daisy, and the other books we featured.

Posted by steven at 8:17 PM No comments:

There are Cats in This Puppet Show

Book:  There are Cats in This Book  by Viviane Schwarz 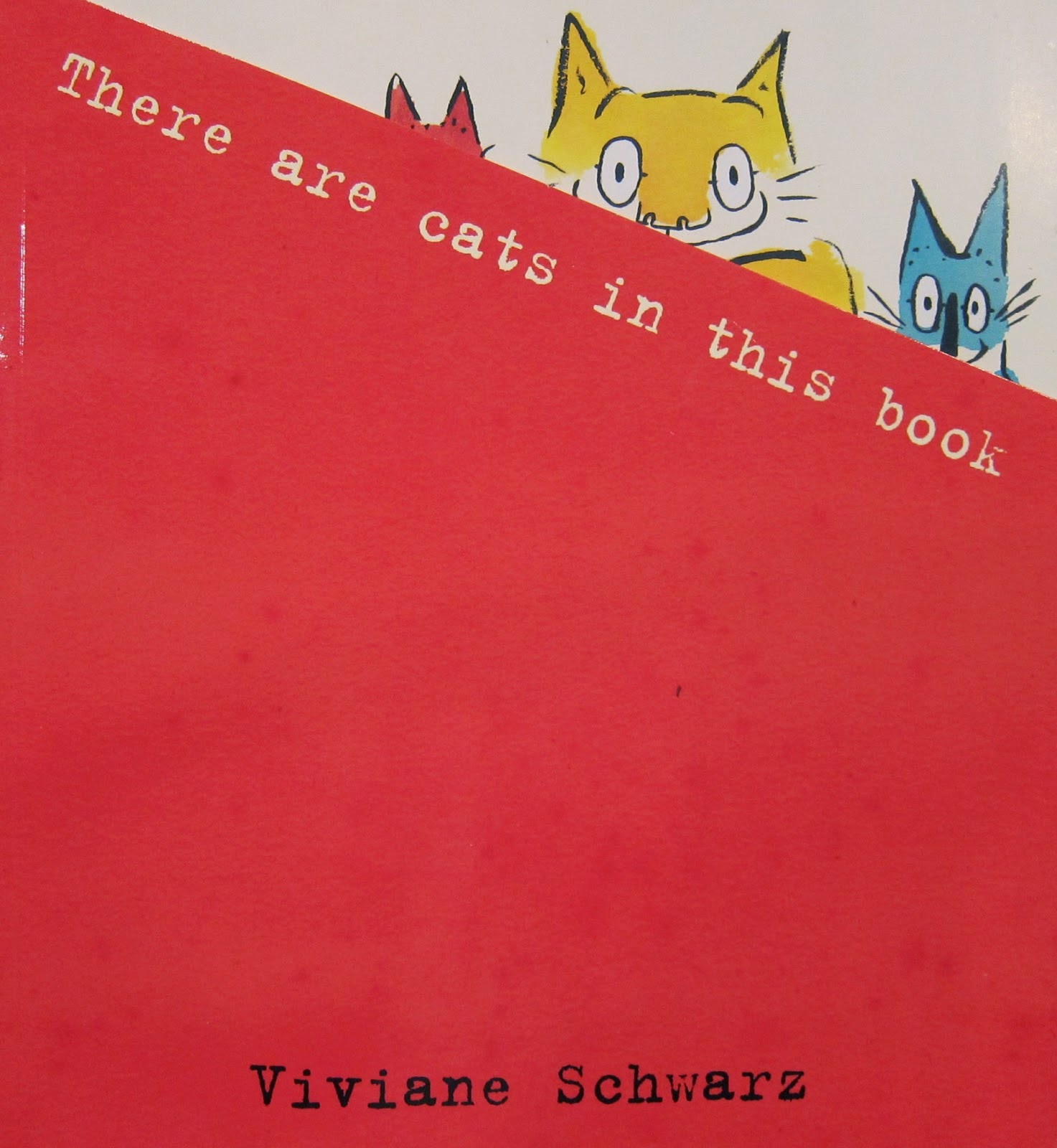 Because our Family Storytimes have big audiences and two people, I don't get that many chances to actually read books to kids.  My main chance comes when preschools and kindergartens come on library visits, and one of the books I love to use is There are Cats in This Book.  It's a great book for interactive sharing, since the cats address the reader/audience directly, and it has physical features like flaps and shaped pages that are very purposeful and effective.  When Sheila and I did a "Librarians' Choice" theme, I considered this favorite of mine and how we could do it with a larger audience.  Turns out it translates pretty well into a puppet show.

I'm  behind the stage with two cats (instead of the three from the book).  Sheila narrates and does some audience interaction, the way you would if you were reading the book.  So she starts with "There are cats in this puppet show.  The cats aren't on the stage yet" (in the book it's:  "the cats aren't on this page").  I lift the cats up under a blanket.  Sheila talks to the audience:  "Should we lift the blanket?"   The cats appear and we go through most of the elements from the book.  The cats talk sometimes to the audience and sometimes to each other.  So it's:  "You look nice" to the audience and "I wonder what else in this puppet show..." When Sheila pulls out a ball of Yarn and tosses it up and down so the cats can see it, it's:  "Do you think there's yarn in this puppet show?"   Sheila brings the audience in again:  "Do you think cats like yarn...?" 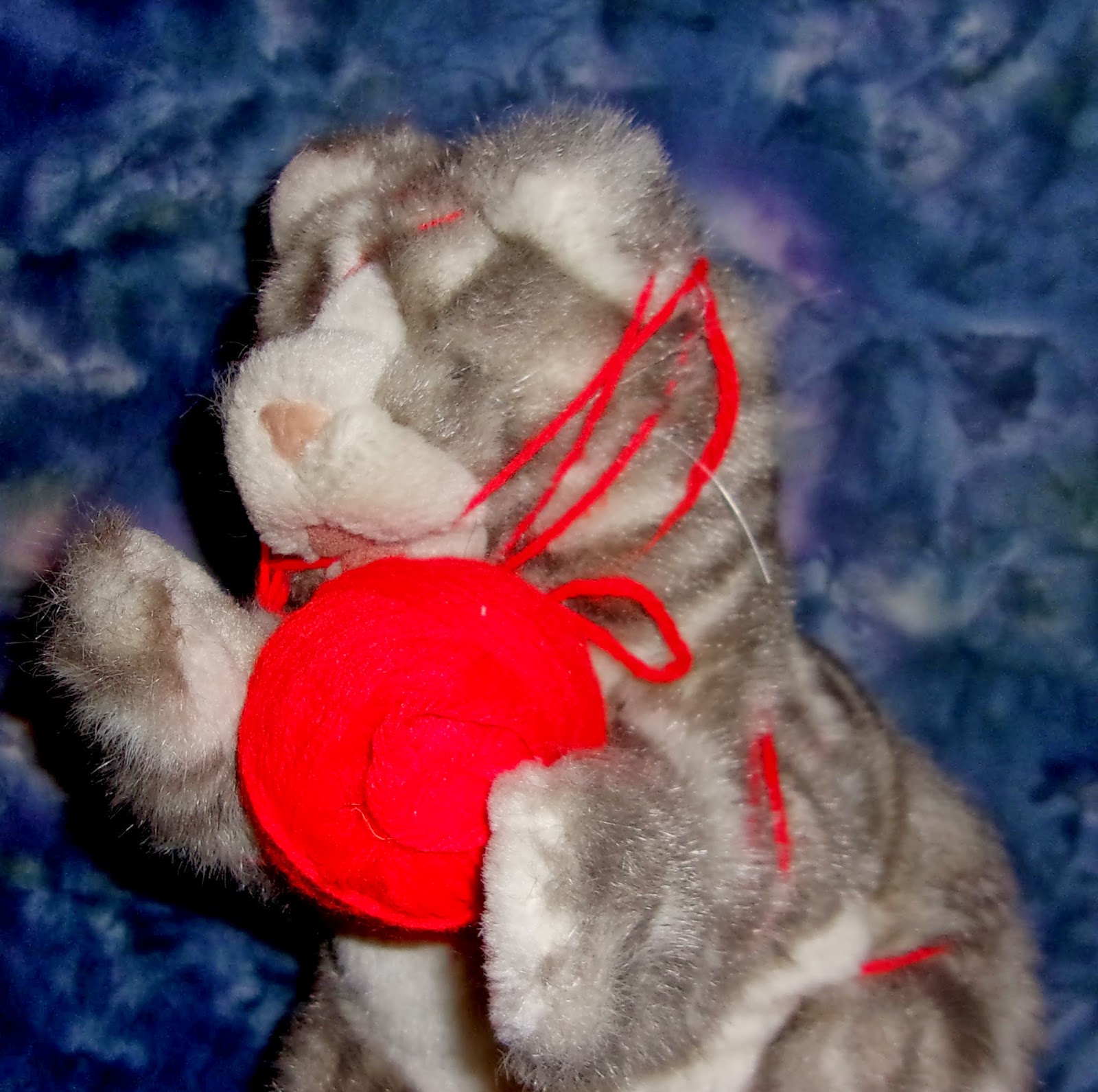 Sheila picks a child from the front row and asks her to give the yarn to the cats.  This worked very well mostly.  The kids did a nice job of handing the objects to the cats, and it made the interactive elements even stronger.  The only tricky part is choosing the child quickly enough so the focus stays on the puppet show and not on the clamoring to get picked.  Once they have the yarn, the cats play with a little bit, then intentionally tangle themselves up in them.  They ask Sheila for help and she untangles them.  The cats say:  "I wonder what else is in this puppet show?  And Sheila picks up a Box. 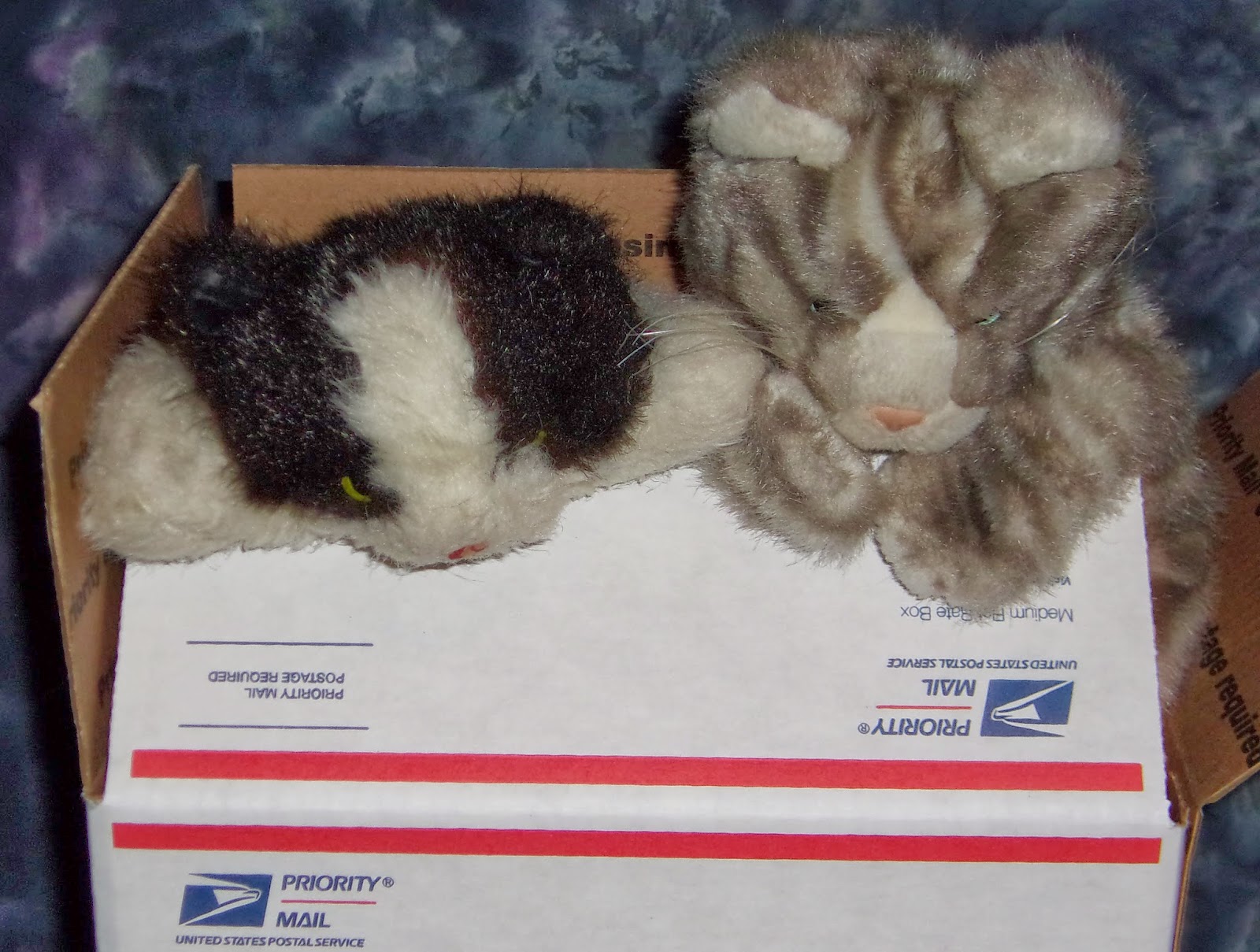 That pattern repeats:  Sheila gets an item, the cats wonder if it will be in the puppet show, a child (or two) gives the object to the puppets, and the cats play with them.  With the Box, they dance on it, climb it, then fall offstage with it, reappearing hidden under it; when Sheila opens it, they pop out.  With Pillows, the cats rest on them ("Cozy pillow!  Comfy pillow!") then one says:  "you know what else you can do with a pillow?....Pillow Fight!"  After they bop each other a few times, one throws a pillow at Sheila and the other throw one into the crowd.  The Fish dive offstage with the cats holding on, then the cats rise back up under a piece of blue thin fabric (and say "we're underwater" just in case the kids don't get what the fabric's supposed to be).  At the same time Sheila squirts the audience so they get the water effect as well.  We added a Net, which Sheila uses to rescue the cats from the water.

One of my favorite parts of the book is when the cats ask the readers to dry them off.  The audience blows and when you turn the page it has a great illustration of fluffed up cats.  We couldn't work out how to copy that with puppets, so we just have the cats say "we're wet, can you dry us off?", then Sheila asks them all to blow.  The cats just say "I feel fluffy!"  Not quite as cool as the book, but effective enough.

We end the way the book does, with the cats going back under the blanket, and saying good night.  Sheila says "Did you like the cats?  I think they really liked you," like in the book, and that makes a very satisfying ending.  I liked the way that this was a gentler, calmer story than what we usually do with puppets.  There was enough action (pillow fights, box pop-outs), but it wasn't as wild as we sometimes get. And sometimes that makes it a little easier for the kids to really absorb the story, instead of just reacting to what happens on the stage.

As is typical when you adapt a perfect book, we weren't able to capture everything:  Like the blow-dry effect mentioned above, or the cat names...in the book the three cats have names that kids really enjoy ("Tiny," "Moonbeam," and "Andre") and distinct looks and personalities.  We didn't name our cats, and although I give them different voices of course, there really wasn't room to establish separate personalities.  I think we did capture the spirit of the book, though, and led plenty of families to check out copies, where they'll experience the story in a different format. 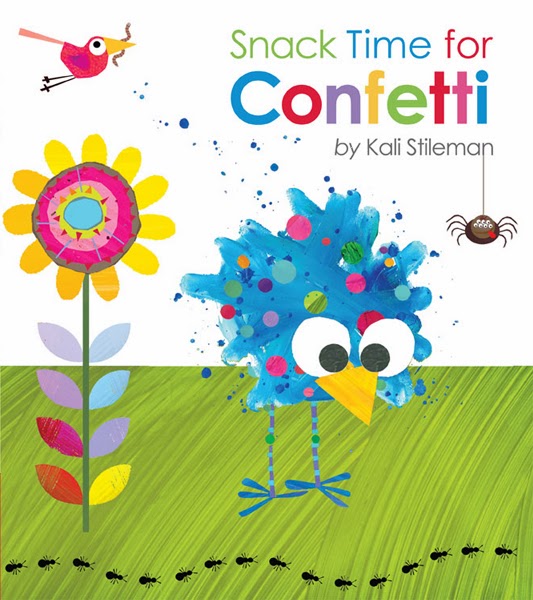 The Wide Mouthed Frog is one of my all-time favorite stories to tell with puppets, but my version is a little too wild for most kids under three.  So I was pleased to discover Snack Time for Confetti.  It's an original story, with excellent illustrations, but has a similar basic structure to WMF:  Hungry animal asks other animals for food ideas and doesn’t like any of them.  But it’s scaled back a bit, and has a nice Yuck/Yum pattern that’s just about right for two-year olds.  So I told it with puppets for Toddler TIme.

I tell it with a combination of narration and dialogue.  “Confetti was hungry.  Really, really hungry!  And she met….a Giraffe.”  So I bring Giraffe out of the bag, and then it’s dialogue:   “Giraffe, I’m hungry!”   “Well, Confetti, I like to eat luscious leaves.”  Giraffe brings out some leaves, then I slip back to narration:  “Giraffe said…. YUM! (as Giraffe nibbles on leaves)….”And Confetti said….YUCK!  So Confetti went to find a different snack.  And she met….a Zebra.”  And the same pattern repeats.

It’s a nice pattern, with some simple elements that work very well with toddlers and puppets:   A new animal popping out of the bag;   That animal’s food popping out of the bag;  And a fun and easy participation prompt, where the audience naturally joins in on the Yums and Yucks, especially with a little hesitation by the storyteller just before each Yum and Yuck.

The book includes a Crocodile twist, where the bird learns that the Croc is hungry and replies with a whisper that she’s “maybe not that hungry.”  The illustrations cue the readers that the Croc is dangerous.  This also echoes WMF a bit, but I feel like it will get lost on the younger toddler time audience, so I don’t include it.  I just stick with the main pattern until the last segment.  So I just do Giraffe/Leaves, Zebra/Grass, Elephant/Apple, and Monkey/Banana (the book uses Nuts for Monkey, but a banana is always easier to manage than nuts in the world of puppets). 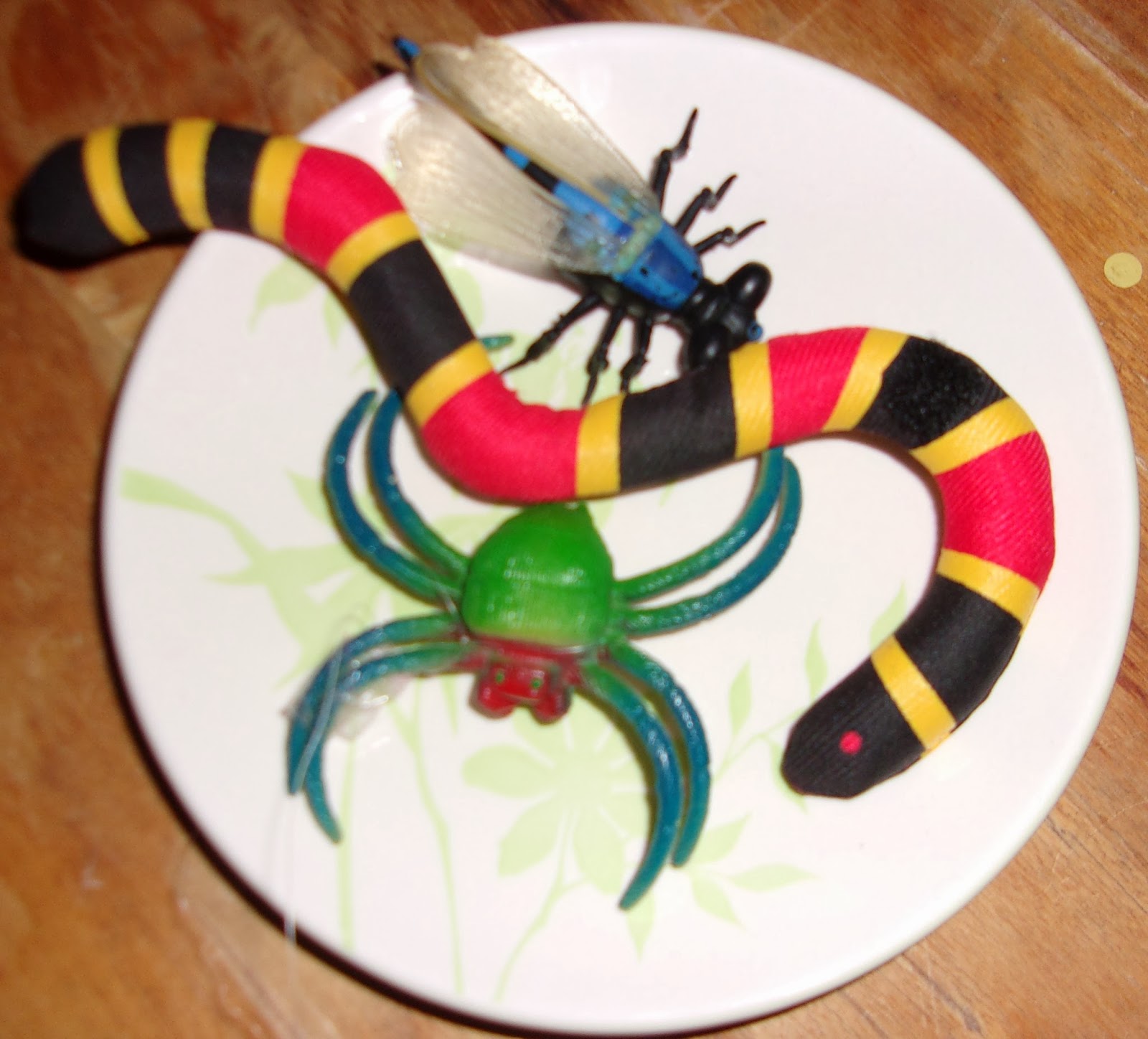 Finally Confetti’s mom comes home.  In the book, she brings her child 5 things to eat…I cut that to 3 for my presentation:  a wiggly Worm, a speedy Spider, and a fine Fly.  I was going to use a caterpillar, but realized that my little stuffed caterpillar is the one from The Very Hungry Caterpillar, and we just did that book two weeks before....don't want to replace that image of caterpillar-becomes-butterfly with one of caterpillar-becomes-bird food, at least not yet.   Mom brings each one of those out, one at a time, and puts them on a plate.   And then of course it’s:  “And Confetti said:  YUM!” and she gobbles them up.  The two bird puppets I have for Mom and Confetti work well for this story because their beaks are pretty nimble…it can be hard to pick stuff up with some bird puppets.

After Confetti eats her creepy-crawlies, I list off the other animals (but I don’t put the puppets back on…too chaotic and not really needed).  “And guess what Giraffe and Zebra and Elephant and Monkey said?   YUCK!”  It's a satisfying ending, with some silliness that two-year olds really get and one-year olds...well they might not get it, but they at least get to see animals eat stuff and say "Yum" and "Yuck" a lot, and with one-year olds, that can be just enough.