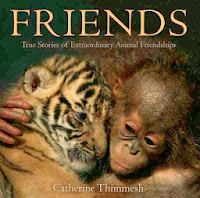 We use scanned images and PowerPoint in a variety of ways during our programs.  Sometimes it's just to make sure that our large crowds can see the excellent artwork....we call that a "straight scan," where we just show the pictures and read the words.  But more often we do something a little different.  One of my favorites is when we add music, which we did this week for our "Family and Friends" theme in Family Storytime. 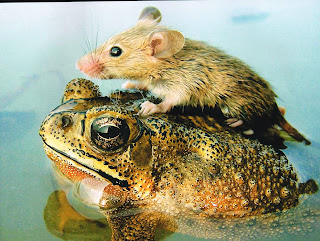 Friends is a very cool book by Catherine Thimmesh.  She briefly tells the story of unusual animal friendships, and accompanies each story with a great photo of the pair.  We've tried this three different ways in our Family Storytime and finally got it right.  First we scanned the images and told the story of each pair in a couple sentences, shortening from the text for our mostly preschool audience.  It was fine, but a little too much for the kids to absorb.  So the next time we added music:  a nice instrumental version of "What a Wonderful World" (the one that was a hit for Louis Armstrong, not the Sam Cooke).  We played that medium-low while we narrated over the music....still too much.

Then Sheila had the solution:  No words at all, just show the pictures with music to accompany.  And it worked great.  We used "You've Got a Friend in Me" by Randy Newman (the kids know it from Toy Story).  We showed each image for about 10-15 seconds and clicked to the next, which fit perfectly for the two minute song. 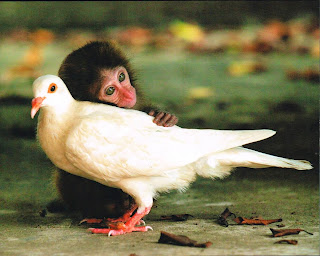 Just focusing on the images allowed the kids to easily follow it and enjoy it without trying to absorb the back stories of each.  Just seeing the frog floating with the mouse on its head, or the monkey resting its head on the bird is enough to keep them absorbed.  We let them know it's fine to talk to each other during the story, because they're really eager to identify the animals and marvel at the unexpected combinations.

The music was light-hearted and fun, matching the mood of the photos.  And although we didn't use the words, we generated strong interest in the book, which doesn't work well for a large group in its entirety, but can be an excellent one on one read aloud at home.  We also pulled a bunch of other animal friend photo essays together for our book display and lots of those checked out too.  Titles include Koko's Kitten, Owen & Mzee, A Friend for Einstein, and several others.  It's a great way to promote non-fiction in a storytime. 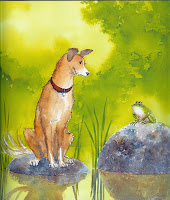 And I really liked the way music worked with Mo Willems' & Jon Muth's City Dog, Country Frog.  We did narration with that one, along with four different music samples (one for each season).

We're lucky, of course, to have a built in projector in our story room, so we can project from the ceiling without having to have a projector on a table.  We got an iPad a few months ago and have added AppleTV which allows you to project from that screen...haven't quite explored the possibilities there, but we're still finding plenty of fun stuff to do with old fashioned PowerPoint.  For other examples you can click on the "Projector" label in the column on the right.,..

Elephant and Froggie (aka Piggie)

With a "Mo Willems Celebration" as our Family Storytime theme, Sheila and I were planning on doing Listen to My Trumpet, which we hadn't tried before....but Mo's latest, I'm a Frog, came in just a week before, and we knew we had to do this one instead.  It works great as a two-person act out.

Piggie (Sheila) starts behind a backdrop, and when Gerald looks for her she "ribbits," then hops onto stage.  And, as usual with the E & P books, we stick to the just-right dialogue straight from the pages.  Even though there aren't that many words, the back-and-forth has to be in the right order and with the right timing, so it does take a few run throughs to get it right.  It helps me to kind of break the story down into sections:

First it's Gerald reacting to the fact that Piggie is pretending to be a frog.  We take it kind of slow, making sure we give the audience time to react to Piggie's hopping and ribbiting and fly catching, and to Gerald's concern.  This section ends with Gerald stating:  "You learn something every day!," which comes up again later.

Then it's Gerald freaking out when he realizes that Piggie is a frog and the same could happen to Gerald.

Then Piggies explains about "pretending" (with the "You learn something..." refrain repeating).

And finally Piggie tells Gerald he can be a frog too, which leads to a fun "No I can't! / Yes you can" back and forth.  The conclusion is perfect, as Gerald reveals that he can't be a frog, because..."I am a cow.  Moo!"

We struggle from time to time with stories that have punch-line endings where we're never quite sure that all the kids, especially the 3's and 4's, really get.  And sometimes we add a clarifying line or something.  But this one is right at their level and everyone gets the joke.

Really, there's not too much to say about this one as an act-out, because it works so naturally and easily.  You can't really say Gerald or Piggie's lines without getting into their characters.  You don't even have to do much in the way of costume.  A simple pig/elephant hat or ears works, and we've even done E & P's just by wearing pink and gray.

This also works great as a one-person puppet show, and there's a video demo here.  I've added a "Label" on the bar at the right called "Video - Storytelling with Puppets" which gets you to all of the posts on this blog that also have a link to a YouTube video demo.
Posted by steven at 8:16 PM No comments: 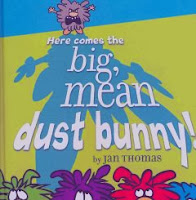 We typically have two people do our Family Storytimes, and many (but not all) can also be done with one, but for this one you really need four or five.  So I know this means many libraries couldn't do this story this way, but we just had so much fun with it I have to tell it anyway.

With our annual "Slightly Spooky Stories" event we always use all five of us children's staff (Shannon, Brad, Sheila, Terri, and myself) and try to find stories where we all have stuff to do.  We had done Jan Thomas' Rhyming Dust Bunnies before as a two person puppet show (details here) and we all knew about this sequel, but never thought to try it until this storytime came up.  We realized we had enough people to have four Rhyming Dust Bunnies (RDBs) plus the Big Mean Dust Bunny (BMDB), but then decided to mix acting out (the RDBs) with PowerPoint scans from the book (the BMDB).  Jan Thomas' illustrations, with her thick black lines and bright colors, come through really well on the screen. 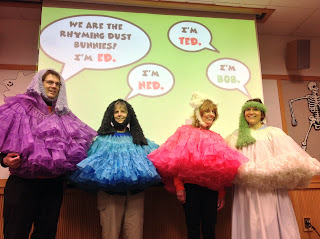 For costumes, we happened to have a bunch of frilly skirts that are worn quite often in storytimes (though not so much by me and Brad).  Turns out if you wear one around your neck instead of around your waist and then tie a scarfy kind of thing around your head, you look just like a dust bunny.  Well not just like, but close enough.  So the four RDBs entered, sort of spinning around and bumping into each other, then went into the simple words from the book.  We had the words show up on the screen, which is a neat way to reinforce the rhymes.  It also helped us remember what to say.

The the Big Mean Dust Bunny appears as an image filling the screen, while Brad is offstage doing his lines with a microphone.  We did some simple PowerPoint animations to get the action into the story:

1.  When the BMDB uses "Sit!" as the rhyme, the four RDB's get directly under the image on the screen, then pretend to get squished as the image moves down to the bottom of the screen.

3.  When the BMDB gets squished by the Cat (Bob tried to warn him), had a sideways image of the BMDB that was squished, then two RDB's on each side pretend to pull it.  Each click switches to a less-squished version of the image, so it kind of look like the BMDB is getting stretched out to full size as we pull.

Sometimes when we try to mix screen images and acting out it can be a little complicated, but in this case I thought the two styles mixed very smoothly.  I'm pretty confident that no one in the audience was really scared by this one, but that's why we call it "Slightly Spooky Stories."