From Head to Toe with Puppets, Spanish, and Participation

Book:  From Head to Toe  by Eric Carle 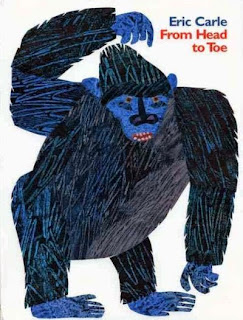 We try to slip in bilingual stories from time to time during our Family Storytime, and Eric Carle books seem to work especially well for this.  From Head to Toe is an especially fun one because it also gets the kids up and doing stuff.

For our two-person version, Sheila led the kids in trying to do the stuff that the animals do, while I provided the animal examples with puppets from behind a backdrop. 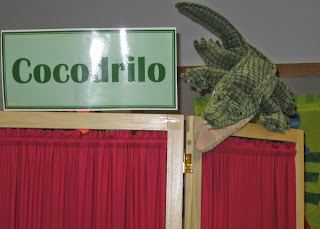 Then I say what I can do:   "And I can wriggle my hips."   And the puppet wriggles as well as a puppet can, which isn't that well, but good enough.  Meanwhile, Sheila demonstrates that for the audience, prompting them to do the same.  And that's the pattern we follow for all of the animals.  I played around a bit with the puppets, having them peek out from different spots before they're entrance, but tried not to overdo that because it can get too distracting. 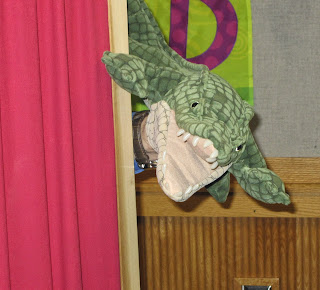 And that's really all there is to it.  Once you've got the signs made, the puppets in order, and an audience, you're all set.  We did make a few adjustments to the animals in the book.  We skipped Buffalo and Camel, partly because we just needed to shorten the whole thing, but also:  we don't have those puppets.  We don't have a Donkey either, but liked that movement (kids put hands on the floor and kick feet out....yes, kind of wild, and we had to give the "don't kick your neighbor" warning, but it was fun), so we substituted a Horse. 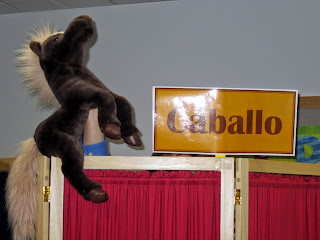 There are many variations to this approach.  You can do it just this way, without the Spanish words, and it works fine.  And if you're puppets don't exactly match the animals in the book, you can substitute freely, as we did, and still be true to the story.  You can also do it as a one-person story, which I've done many times in solo storytimes.  With that approach, I have to rely on the puppets and the words to show the kids what their actions should be, which goes okay, but it's even better when you have that second person to demonstrate the human way to move like those animals.  Oh, and I have to make sure I don't forget:   You can read the book, show the pictures, have the kids do the moves, and it's also excellent. 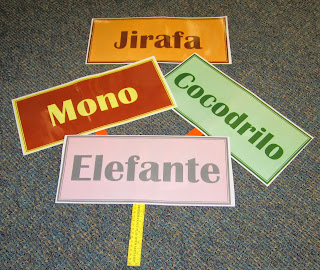 Posted by steven at 9:18 PM No comments: