Anansi the Spider by Gerald McDermott

A Ball for Daisy  by Chris Raschka

Don't Let the Pigeon Drive the Bus by Mo Willems

Inch by Inch  by Leo Lionni

King Bidgood's in the Bathtub  by Audrey Wood, Illustrated by Don Wood

The Lion and the Mouse  by Jerry Pinkney

Mister Rabbit and the Lovely Present  by Charlotte Zolotow, Illustrated by Maurice Sendak

No, David!  by David Shannon

Raven: A Trickster Tale from the Pacific Northwest  by Gerald McDermott

The Stinky Cheese Man and Other Fairly Stupid Stories  by Jon Scieszcka, Illustrated by Lane Smith

This Is Not My Hat  by Jon Klassen

Tops and Bottoms  by Janet Stevens

What Do You Do with a Tail Like This?  by Steve Jenkins and Robin Page

Where the Wild Things Are by Maurice Sendak

Abiyoyo is one of a handful of stories I tell that I actually heard as a child.  We had the Pete Seeger version on a record (it's possible it might even have been a reel to reel tape!).  It was too scary at first and I would leave the room at "the sun rose blood red over the hills," but eventually I got used to it.  I've told it solo a few times over the years, but at my current library Terri and Sheila came up with a way to tell it as a two-person tale, and Terri and I did this way for our "Monster" storytime theme.

The first part is just telling and acting out.  I narrated, introducing the boy and his father.  While I described the boy's annoying ukelele playing, Terri acted as the boy.  We considered using a real ukelele, but decided that pretending works almost as well.  I talked about the Father's tricks with his magic wand while Terri became the townspeople he tricked.  She mimed drinking a glass of water, sawing a log, and sitting in a chair.  I did a "Zoop!  Zoop!" with my want (also imagined, no prop) and she acted like the things just disappeared.  The second half begins right after the boy and his father are ostracized (there's our vocabulary word of the week!). 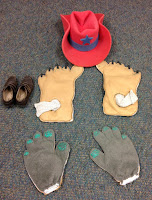 While I tell the audience how the townspeople liked to tell stories about giants, Terri zips off behind the backdrop and gets her Abiyoyo gear together.  Instead of trying to actually become tall, Terri puts on giant-sized gloves, giant-sized feet, and a giant sombrero.  She makes her entrance by sticking one giant hand into sight then stomping out into full view.

Her kind of silly appearance works just right, as the kids who might have been a bit scared at the build up to the giant's arrival get that it's all in fun, but we still got the suspense up for a while, which is a key part of the story. 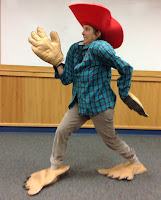 While I narrate Abiyoyo's path towards town, Terri stomps around.  We have some cut-out sheep, cows, and goats that we set up (they're about three feet high) and she knocks them all over.  In the original story he eats them, but this works too.

When the Father and Son run out to meet Abiyoyo, I get on my knees, so I'm looking up at the giant.  I play my pretend ukulele, Terri dances in a silly giant style that's a little too funny for me to keep a straight face, but that's okay.   Click here for a video clip (no audience) sample:

When she dances so fast that she falls over, Terri lies down mostly behind the backdrop, but with her giant feet sticking out so everyone can see them.  As the Father, I go up with my magic wand, and as I Zoop!  Zoop!, Terri pulls her feet all the way behind the backdrop and "Abiyoyo disappeared!" 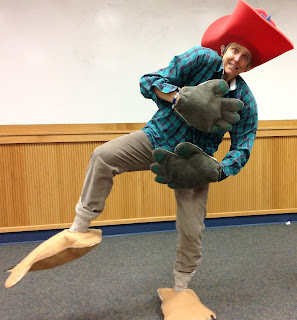 We finish up with the people welcoming the Father and Son back into town, and a final singalong version of the Abiyoyo song, which is a little hard for me because I'm a bit out of breath and even harder for Terri because she just got through dancing like a giant, and then dancing faster.

For the telling, I pretty much went straight with Pete Seeger's words, though I did have to edit the "bring your damn ukulele," which is how he told it on the record, to "darn ukulele" as it is in the book.  At five years old I thought it was pretty cool that Pete Seeger used one of the bad words right there on a record, and I guess I still can't quite bring myself to use it with kids.