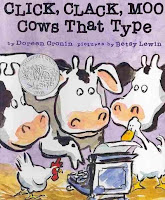 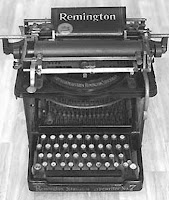 K-2 Book Adventure theme was “Silly Stories” and we decided to finish the program with Click, Clack, Moo. It’s one of those great school age picture books and it just seemed like it must be adaptable for our type of presentation. It’s been performed as a play in children's theaters, with costumes and all, but we needed short and fairly simple. Plus we had an old typewriter up in the attic that needed to be used.


I was Farmer Brown and started by showing the kids the old typewriter that I was taking out to the barn, which was actually the puppet stage. When I brought it back there, Sheila hooked our lapel mike right up close to the carriage. So while she typed (using the one finger method so the keys wouldn’t stick…remember how they used to do that if you typed too fast?) it made a truly satisfying “click clack.” She and Terri also supplied the “moos” from behind the stage and made the cows pop out here and there. Our old typewriter didn’t have a workin 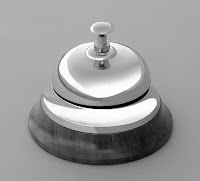 g carriage return, so she would ring our desk bell after each note was finished and it worked perfectly. The kids began to listen for it each time, anticipating the next appearance of a 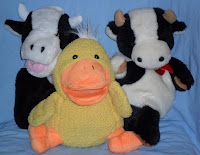 cow with a note. Even the rolling sound that you make when you load and take out the paper came through on the microphone. The kids needed to get what was going on by the sounds for the story to worked...and they did.

When Farmer Brown finally typed his note, we used the electric typewriter that we still have in the library for patron use. For the Duck segment, Terri came out from the stage with a duck puppet, carried the blankets back to the barn, emerged with the typewriter, stopped halfway, then took it back behind the stage to set up the funny “Click, Clack, Quack!” conclusion.


Afterwards several of the kids spent some time looking at the old typewriter. I think it's their fascination with old things, but also there's something especially interesting about a machine where you can actually see how the parts work. Makes me a little nostalgic, but not much...I used way too much white out back in the old days to ever want to really type again.


This was the one story in our program that we weren’t sure of, since we hadn’t tried it before and, as usual, didn’t have much time to practice. We thought maybe we should start with it, when the kids would be most attentive and most able to follow an iffy story. We decided to close with it, though, reasoning that even if it’s a bust, they’ll at least have had 35 minutes of good stuff already. Since it wasn’t a bust it really didn’t matter, but I always think it’s interesting how much time and thought you have to put into the flow and order of a program like this. Other parts of this K-2 program will show up in separate posts in the near future....
Posted by steven at 9:56 PM