For our Silly Stories K-2 Book Adventure I wanted to include at least one true “Noodlehead Tale,” and this is one of my favorites, and fun to act out with kids. Sheila and I were Mr. and Mrs. Green, with three volunteers as our children. We rowed a boat, picnicked, rowed back, then counted to make sure all were here. And, being noodleheads, we each counted only four because we didn’t count ourselves. Upon being reminded to include ourselves, by a sensible neighbor (Terri), we then counted six because we started and ended with ourselves. Good, silly humor that’s just right for this age. Then we count noses, which is done by each person sticking their nose into mud. 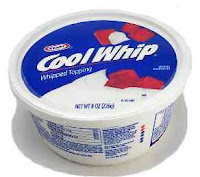 In this case, mud was a cookie sheet full of whipped cream mixed with chocolate pudding. Plain old chocolate Cool Whip works better, but there was none at the store…do they even still make it? It looked the part, but the consistency was too springy: when you stuck your nose in it, it sprung back so it didn’t leave the desired impression. So we had to scrape a bit out with our finger. Or

, alternately, press the child’s whole face into the mud, which Terri decided to do with a couple of the kids. So some of us had a nice dab of mud on our noses, while a couple of the children were really a chocolate mess. That made it extra funny, though, and they were good sports, and we were prepared with plenty of paper towels. We did use three people for this, but you can do it with one pretty easily. The teller can narrate and be the father and even do the push-the-kid’s-nose-into-the-whipped-cream person if needed. I also like doing this story because it might lead kids to read the other stories in the collection and/or check out the companion book, There is a Carrot in My Ear and Other Noodle Tales. Some day it would be great to build a program around Alvin Schwartz's collections. Not just noodle tales and scary stories, but jokes and riddles, superstitions, secret codes, tongue twisters, tall tales...one of the most booktalkable authors ever.
Posted by steven at 8:11 PM