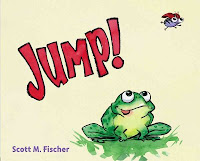 
Any time I browse through a new picture book and notice that there are lots of animals, but only two on the same page at any time, I think: puppets? If the animal characters are interacting verbally and/or physically in fun ways, even better. Jump is an excellent new picture book with funny little rhymes and a strong pattern that makes the whole thing simple to learn by heart: “I’m a bug, I’m a bug, I’m a snug little bug, and I’m sleeping on a jug, until I see a frog and I…JUMP!” The pattern continues from frog to cat to hound to croc to shark and finishes with whale (who ends the tale). A very nice puppet story for Toddler Time and would probably work just as well with preschoolers.

The puppet handling is easy: each puppet pops out of the bag and chants the rhyme. You could sing it as a song too, but I usually opt for the chant when I can (you would too with a singing voice like mine). Then I just stretch out the “until I see a….” while I’m getting the next puppet out of the bag. The “and I…JUMP!” can be a nice bit of action, with the new puppet attacking and just missing the jumper. Doing this almost in slow motion works best I think, so the audience can see it coming and anticipate. And they can also join in verbally with the “jump!”

For my Toddler Time group (1’s and 2’s) this week, I pretty much stuck to the words on the page. I dropped the shark, just because it was one too many animals for their attention span. An

d though I don’t have a puppet whale, I was happy to discover that we still had a stuffed animal whale that belonged to one of my kids and we kept around because you never know when you might need a whale for a story (even though it had not been used for almost twenty years). Another slight change: in the book, the animals actually swallow each other, then get spit out by the whale at the end. I had them all escaping each time…it just worked better with the puppets and the age level. Like Jump Frog Jump, this is an easy, action packed puppet story to use even if you haven’t done much with puppets before.
Posted by steven at 6:51 PM