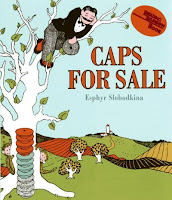 Props: Stackable Caps: at least a dozen or so to wear, plus extras to match number of kids
Presenters: One
Audience: Toddler Time (1's and 2's)....but also a good story for older


Squeezing a preschool-and-up story into a Toddler Time for 1’s and 2’s isn’t always a great idea, but sometimes I can’t help it. And Caps for Sale is such a strong story, it works well, just in different ways. I’ve always told it and acted it out using my stack of baseball caps and having kids play the monkey. This time I was able to use the felt caps created before my time here at the library. These are much easi 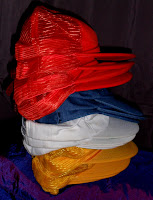 er to balance on one’s head than the baseball caps. Since we only had a dozen or so of them, though, I stuck my other caps in a bag in order to have enough for each child to use later. The spectacle of the storyteller walking up and down with those caps on the head never fails to fascinate the kids, even the young ones.

When the peddler falls asleep under the tree, I pass out a cap to each child while telling: “while he slept, a bunch of monkeys snuck down from the tree and each one of them took a cap.” Passing them out interrupts the story for a while, but it still keeps their interest. It turns out that doing this with a Toddler Time crowd is actually easier than with older kids, since the grownups really handle the cap management. And although I’m not sure they all got the idea that they were being monkeys, they had a good time imitating the peddler and making the “tsz, tsz, tsz” refrain (which I just simplify and have them say “jib, jib, jib”). With older kids, my favorite part is when I throw down my peddler cap and cue the kids to all throw their caps at me. Toddlers can do many wonderful things, but their cap-throwing ability is generally well below par, so we didn’t really get that nice visual effect this time. But kids and grownups were great at putting caps into the bin. Then I just had to scramble to pick out the twelve felt ones, group them by color, and place them back on my head (slowly, slowly, so as not to upset the caps).

The first time I saw this story told like this was by the late Bruce Vogel, who was the wonderful Coordinator of Children’s Services for years at Alameda County Library in California. I was in my first year or two as a librarian and we had (for some unfathomable reason) agreed to tell stories in a shopping mall. We wound up stashed down in the children’s clothing section with no mike and no stage and had to move clothes racks around to make a small storytelling space. I couldn’t see how we could possibly gather any sort of crowd, but Bruce was undeterred. He pulled out his caps, neatly stacked them, and proceeded to march around the area, calling out “Caps for sale, fifty cents a cap!” We soon had enough kids to make a group and they loved his stories. What my stories were and how the kids responded is lost to memory, which is a good thing for all involved.
Posted by steven at 5:12 PM