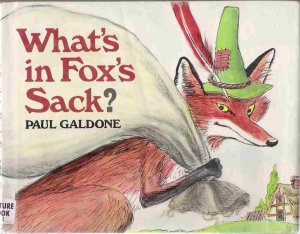 Here's one of the first stories I ever told with puppets.   It has a repetitive pattern that's easy to learn (and for the audience to follow), and that pattern builds and twists a bit at the end to make a very satisfying story.  When I tell it with puppets I like to it as narrator, as well as doing the puppet characters.  So I'll describe Fox catching a bee, then show him doing that.  I tell how he "walked and walked and came to a house...."  And later it's  "off he went, trot, trot, trot, to Squintum's house."  I think it's because I first presented as a book and an oral tale, and I just really like Galdone's language. 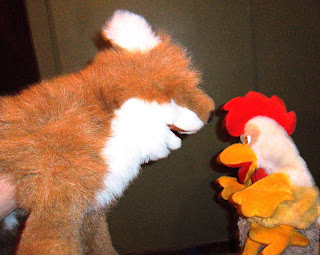 Fox proceeds to meet four different ladies, and asks each one not to look in his sack while he goes to visit his friend Squintum.  I usually don't use puppets at all for the ladies, I just kind of play them myself, interacting with Fox in character, promising not to look, then opening the sack after all.  I've done it with four people puppets (I don't have four ladies, so two ladies, two men), but I don't feel it adds that much, and any time I can simplify the prop and puppet handling I usually do.

The strong pattern of the story invites some good interaction with the audience.  They'll often join in when Fox says "Don't look in my sack!"  And you can play up their involvement as the Lady by asking them:  "....should I look in his sack?"  (response is typically split evenly between "yes" and "no."). 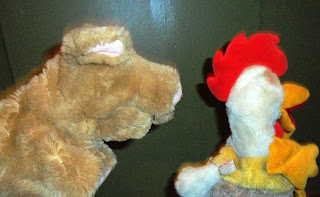 The heart of the story is the narrative and dialogue, rather than action, but there are moments where puppet movement can really help:    When each Lady pulls the animal out of the sack  when Fox returns and kind of gets in the Lady's face when he says "Oh ho!  So you did look in my sack!;"  And short simple chases when one animal chases the previous one away. 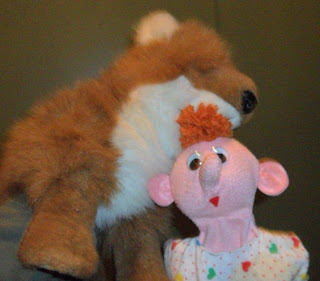 It's always fun to watch the audience's reactions shift towards the end.  They've kind of settled into the easy pattern of Fox getting a new animal in his sack each time, but when they realize it's a Child who will be in there, they're not quite so relaxed.  And that brief bit of tension drops once they realize that the last Lady is putting her Dog into the sack to fool Fox.

You can see a video sample of this story on my Youtube Storytelling with Puppets page.  It's a tale that also works great with a puppet stage.  When I do it that way, I drop the narration part, so Fox and the Ladies describe what they're doing as the story proceeds.  With a stage, you can have some fun with the interactions between the animals, extending the chase scenes, having Rooster hide from Pig a few times, for example.

The excellent Paul Galdone version of this tale is out of print and goes for $140+ new on amazon, but Houghton Mifflin Harcourt has brought several of P. G.'s folktales back into print in the past few years and I keep hoping they'll add this one.  And The Monkey and the Crocodile....and The Magic Porridge Pot....okay, let's just say:  all Paul Galdone folktales should be back in print...in hardcover.
Posted by steven at 9:20 PM