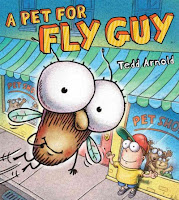 Book:  A Pet for Fly Guy  by Tedd Arnold

Tedd Arnold's "Fly Guy" books are excellent, but most don't translate too easily into read alouds or a two-person act-out kind of thing.  But A Pet for Fly Guy is written as a picture book, rather than an early reader, and the structure is just right.  I've used as a storytime read aloud several times, so when Sheila and I had a "Friends" theme for Family Storytime, I thought we could try it with a bigger production. 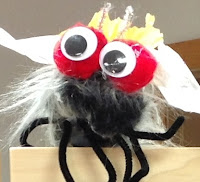 I was Buzz, and Sheila used this cool fly puppet she made some time ago (for Old Black Fly) on a bent up wire hanger for easy control.  The story divides neatly into sections.  For the first part, Buzz introduces Fly Guy and talks about the cool things they do together.  Fly Guy responds with variations of "Buzz," which is all he can say.  So we act a few things out:  playing chase, hide and seek, and eating snacks. 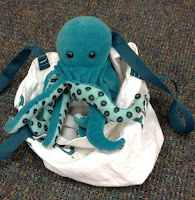 In the next part, Buzz tells Fly Guy about all the great pets kids have.  We had three bags with puppets in them and asked one volunteer to come up and show the audience their pet.  This was a good simple way to do the child volunteer thing, because we could pick them in the middle of the story, and the thing they had to do, pull puppet out of bag and show audience, was simple and cute.  Then we sat that first one down and chose another.  We used a Monkey, Porcupine, and Octopus, but any three unusual/silly animals for pets would do. 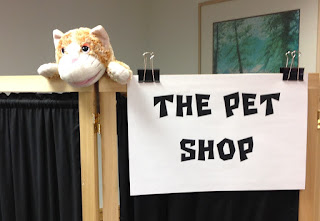 The next phase is a visit to the Pet Shop, where Buzz tries to choose a good pet for Fly Guy.  We just had our backdrop with a Pet Shop sign and I went behind it and came out with a new pet each time.  We used Cat, Dog, and Frog; substitutes could work, but they should be pretty typical pets this time.  Each time the pet interacts with Fly Guy in a bad way:  Dog licks, Cat pounces, Frog chases.  We tried to keep plenty of movement going on, and Fly Guy responded with appropriately toned buzz-y noises each time. 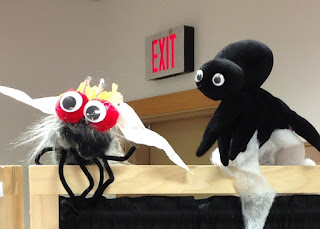 The final set of puppets are ones that Fly Guy chooses when they visit the Park.  We used another backdrop with a tree in front for the park.  For these, Sheila took Fly Guy behind the backdrop, then Fly Guy popped out on top with a pet.  Our choices were Chipmunk (too loud), Worm (too slimy), and Spider (too scary).

For the conclusion, it's just Buzz and Fly Guy again, and this time Fly Guy decides that Buzz will be the perfect pet for him.

You don't really need the two backdrops to do this, and using two puppets per section instead of three would work okay too.  I'm pretty sure this will also work as a one-person story with puppets, and hope to try that soon....

Finally getting to use a "Fly Guy" book in Family Storytime gave us the opportunity to promote other books with F. G. and Buzz, since we always have two tables full of books available for check out.  And with Fly Guy we could promote not just the early readers, but also the non-fiction "Fly Guy Presents" series, which at least some of our picture-book crowd hadn't heard of yet...