K-2 Program Summary: "Bug Tales"
We do a monthly program called “K-2 Book Adventures” that’s lots of fun to develop and present. Our goal is to get 5-8 year olds really excited about books and the library. We approach it sort of like a storytime for older kids, but try to mix it up a lot with a variety of presentation approaches. We have multiple copies of the featured books on hand and are glad to see most of them check out each time.

I’ll post details on individual stories separately, but will also do a quick rundown of the pieces of each program. We’ve only done four so far. "Bug Tales" was in January, with Sheila, Terri, and I (Steven) presenting for about 100 kids and 50 adults. The program ran about 45-50 minutes: 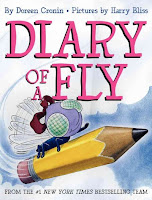 of a Fly/Spider/Worm books by Doreen Cronin and Harry Bliss.
We scanned and projected illustrations from a couple of these books. Terri (as Spider) and Sheila (as Fly) read the words while I narrated. I introduced them by saying: "We can learn a lot about bugs from books, but wouldn’t it be great if they could tell us their own stories, or maybe write them down in a diary…?” It made a nice intro, we thought.

Insectlopedia by Douglas Florian
We read two poems, with Florian's words projected alongside several photographs of the featured insects. We chos 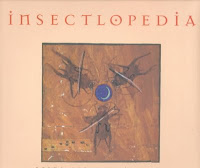 e “The Monarch Butterfly” and “The Daddy Longlegs” (“Oh Daddy, Daddy-O, How’d you get those legs to grow?...”). We alternated lines between the three of us as we told.

e That Bug”We chose three kids, and each one read three clues about a bug. The audience made guesses and we revealed the answer at the end, showing a picture in the book. For example: “I have eight legs.” Some guesses. “I have two big eyes and two small eyes.” More guesses. “If I were your size, I could jump 80 feet.” A correct guess (which impressed me) and then we showed the fold out photo of the jumping spider from Nic Bishop Spiders. Along with the stories, we wanted to highlight non-fiction bug books in general, and also call attention to excellent individual titles like this one.

The Fly Guy books by Tedd Arnold
We did quick booktalks for several of these, using scanned images from the books. For

example, with I Spy Fly Guy, we showed the image of Fly Guy happily using a garbage can for "hide and seek," then told how the can was taken to the dump and when Buzz got there and called Fly Guy's name, a zillion flies answered "BUZZ!" We've learned that if we combine booktalks in with the storytelling it's best to make them quick and concise. A good 20 or so Fly Guy books got checked out afterwards, so I think this one worked.

Bug YogaTo give the audience something active to do midway, we did three yoga poses and related them to bugs. Goddess Pose became “The Water Bug Pose,” Child’s Pose became “Roly Poly Pose,” and we got to use the real name for “Dead Bug Pose” (aka Happy Baby). On the screen we projected a photo of the bug and a diagram of the pose.

"Name That Bug" Part 2
This time

we used the projector to have kids guess bugs. We scan an illustration and show just a small portion with the first slide and have the audience guess. The next slide shows more of the illustration and the final one shows the whole thing. An army ant from Micro Monsters is one example. Kind of similar to Tana Hoban's excellent die cut books like Look Book...but with pictures big enough for a large group to see. And again, when they've guessed the bug, we show them the book that it came from.

Fruit Loop Caterpillars
We added a snack/craft to close the program, where you put Fruit Loops on a pipe cleaner to make a caterpillar. You can eat the cereal but not the pipe cleaners. Apparently this works with licorice too, but we couldn’t find thin enough licorice around here.

School Promotion
Each month we present a "sneak preview" of the K-2 Book Adventure to about 130 kids at our two primary schools. We alternate grades so that all of the K's, 1's, and 2's see us every three months. We have about 15-20 minutes to get them excited about coming. This time we did one "Name That Bug" piece (which included a reference to crickets in lollipops that we knew they'd remember) and a bit from Anansi the Spider, which included squirting water and spraying silly string. We bring a quarter sheet reminder slip for all K-2 students, even the ones we don't visit that month, to make sure parents and caregivers get the details too.

Previous K-2 Book Adventure programs were: “Dragons,” “Arnold Lobel,” and “Fractured Fairy Tales.” Details may follow in separate posts, though it may be a while…
Posted by steven at 3:38 PM