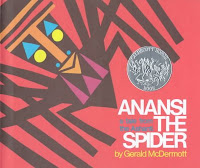 Our January "K-2 Book Adventure" program was "Bug Tales," and even though spiders aren't technically bugs, we used the loosest definition in order to fit in Anansi the Spider by Gerald McDermott. I love to use this as a straight book with small groups of K's or 1's, but for big groups (we had about 100 kids) we stray from the formal tone of the folktale and get a bit silly. In the story, each of Anansi's children has a special talent, so six volunteers play those roles and we give each a prop. So "See Trouble" gets big goofy glasses. "Road Builder" gets silly string, to build a road out of webs. "River Drinker" gets a big cup or bowl, "Game Skinner" a sword, "Stone Thrower" a ball, and "Cushion" holds a pillow. The narrator tells the story with a spider hand puppet, sticking fairly close to McDermott's fine storytelling language. Anansi gets lost, falls into trouble, and is swallowed by fish, all told and shown by the narrator. Once Anansi is swallowed, the kids' part comes, and so does some silliness.

When the time comes for each child to do his thing, we guide the volunteer. See Trouble just steps forward and looks goofy. But Road Builder squirts the silly string all over the place, whic 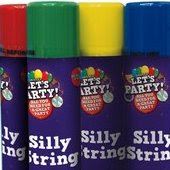 h is chaotic and fun. After things settle down, River Drinker pretends to gulp from his big bowl as the narrator adds: "he was kind of a messy drinker and sometimes he spilled," and squirts the audience with water. Game Skinner slices at the fish with his toy sword, then the narrator uses the puppet bird to lift the spider puppet up, at which point Stone Thrower throws the ball at him. As the spider puppet slowly descends, Cushion steps up with the pillow and Anansi lands gently.

This whole sequence can get wild, so I warn the audience in advance to stay seated (but silly string is hard to resist). Stone Thrower may not hit the bird, but that's fine...just give him another try or say that the ball scared the bird into dropping Anansi. As the storyteller you can control the story even when the visuals (puppets and props) don't play out perfectly.

Once that action is done, the story moves neatly back into a more thoughtful, serious tone. Anansi finds a "great globe of white light" (a styrofoam sphere) and tries to decide which child most deserves it as a prize. This gives the six volunteers one more chance to step forward as he considers each: "Was it See Trouble who helped him the most?...or Road Builder...?" Which leads to the highly satisfying ending where the Sky God puts the globe into the sky for all to see (as the moon). We don't need a Sky God character...the narrator acts as him. We attached the "moon" to fishing line strung on the ceiling and subtly lifted it up to the ceiling, a neat little extra effect.

I've wondered at times if I stray to far from the book in this version, since the tale is really not silly at all. On the other hand, six spiders with wonderful talents just lends itself so nicely to acting out with kids and props. And I like the way you can still use the language and tone of the book as a storyteller...the transition from silly string chaos back into the moon bit at the end is really smooth because it's all anchored by McDermott's language and the patterned plot of the folktale.