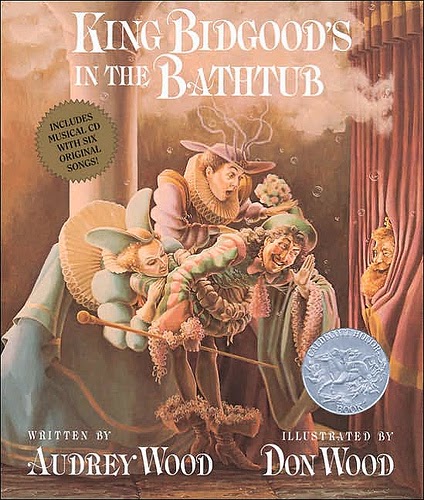 I post infrequently during summer because I don't typically do many new stories, but I got a chance to try one recently.  Our summer Storytime is actually "Preschool Stories & Science," where we do just one story, plus a science demonstration and hands-on craft and science tables.  This is usually done by Sheila and Terri, but Shannon and I filled in for them this week.  We don't choose stories based on their science content, but it's nice when they have something in common with the activities.  This week the kids did bubbles and magic sand, so:  a bathtub story! 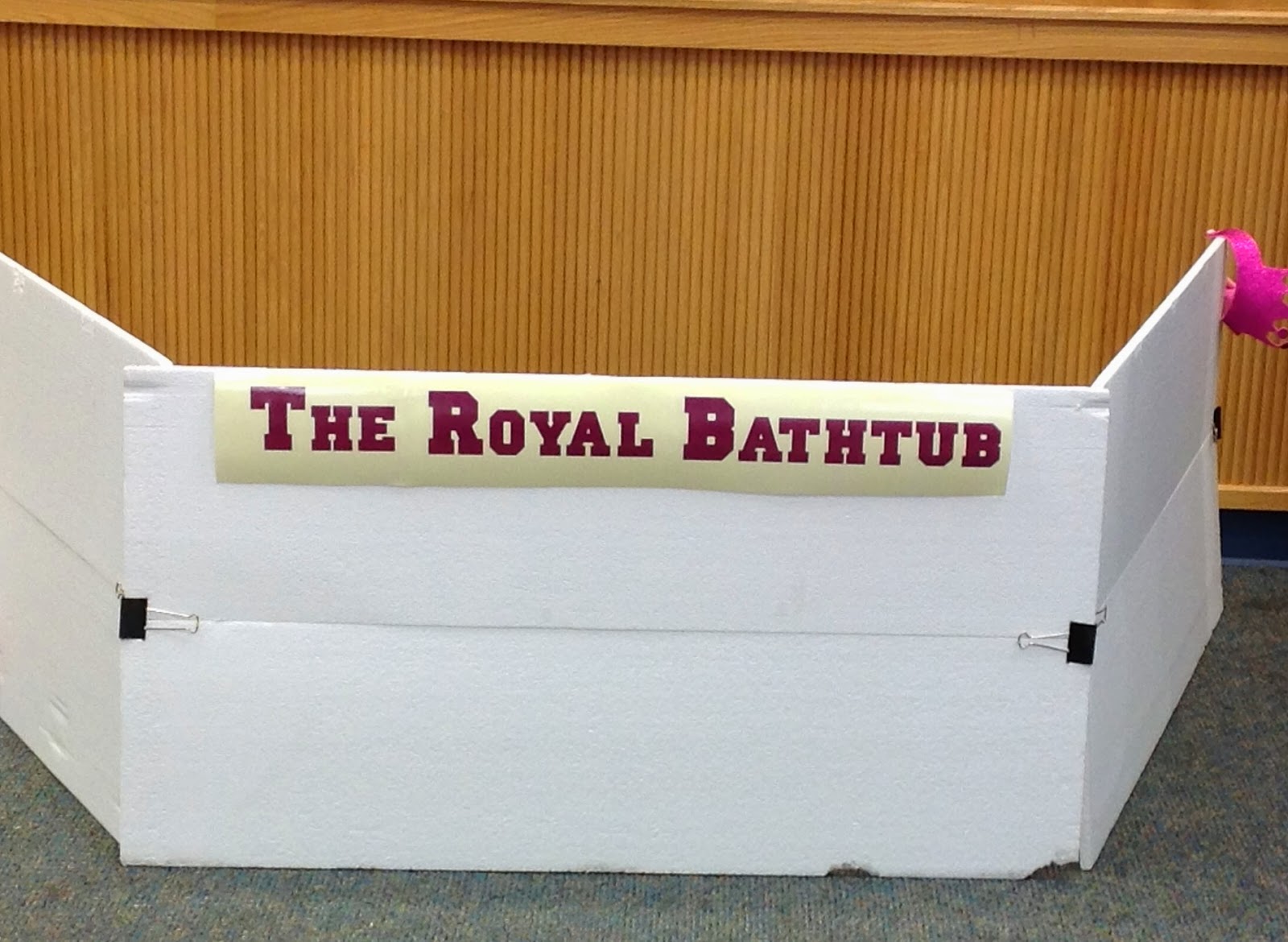 King Bidgood has always been a favorite of mine, but the pictures aren't meant to carry to a storytime audience.  So we decided to act it out with some child volunteers and a few sound effects from FreeSound.com.  For a tub, we just found some strips of styrofoam we had around for some reason, clipped them together, and put a sign on it.  It was the right height for kids to look over and easy to move in and out of, since it was three-sided with an open back. 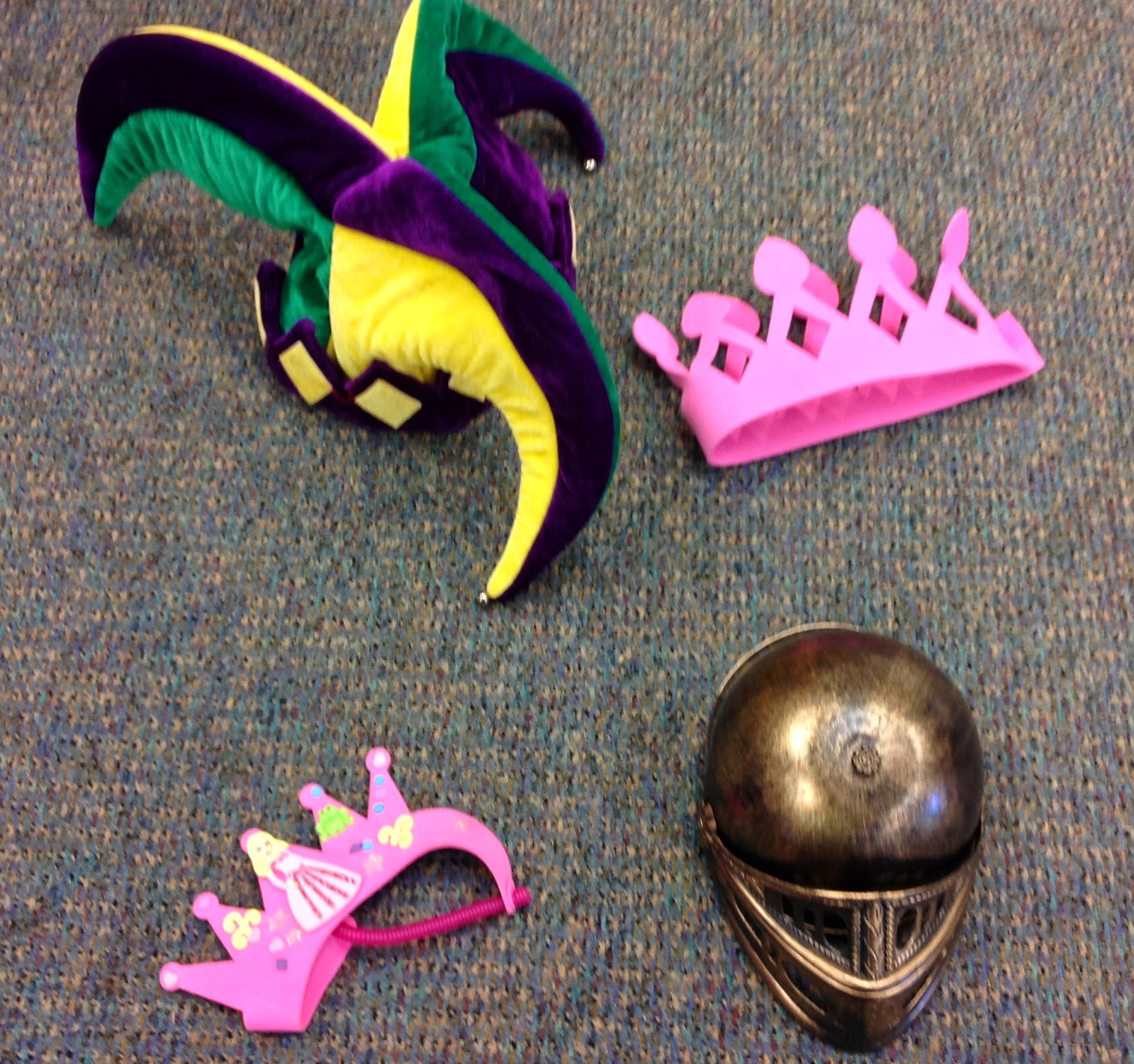 We did change the characters around a bit to match our props and preferences.  Shannon was in the tub, so it became "Queen" Bidgood.  We kept the Knight from the book, but the Queen who lunches became a King (two Queens wouldn't make sense), the Duke who fishes became a Jester (we have a Jester hat; we don't know what a Duke hat looks like), and the Duchess became a Princess (see Duke-to-Jester explanation).  As the Page, I called up the four child volunteers and gave them each a hat and a thing to carry while Shannon as Queen B was behind the backdrop gathering her bath stuff.

We had our sound effects loaded onto a PowerPoint file, so a click played a short "Fanfare" to announce the Queen's entrance.  Shannon showed the kids her bath toys, sang a bit of "Rubber Duckie," and got into the bath.  Another click played a "Tub Filling With Water" sound effect, while Shannon flipped on a bubble machine.  This looked and sounded good enough that several kids stood up to peek into the tub to see the water.  Nothing like an audience with a rich imagination. Then we got into the story.  We adjusted the words a bit to make it all dialogue.  So "Help, help, said the Page when the sun came up" becomes "Help, help, it's morning and the sun's come up..."  I asked the audience to join in with the "Queen Bidgood's in the bathtub and she won't get out!" refrain.  Then when I say "Who knows what to do?" we click the Fanfare music again and the Knight/child gets to say his only line:  "I do!"  Then I fill in the rest, adapting from the book again:  "...said the Knight when the sun came up" becomes "It's the Knight! And the sun's come up."  And the I say the next line too, to the Queen:  "Get out!  It's time to battle."  That line is said by the Knight in the book, but having the storyteller as Page do more lines and guide the action works well.  The kids just have to hit their "I do!" line (and about 3 out of 4 usually do) and look cute.  The rhythm of the text is really important to the story, so we tried to hold true to that.

The knight goes into the tub, setting up Shannon's line as Queen Bidgood:  "Come in, come in, with a boom, boom, boom.  (rather than "'Come in,' said the King...")   Today, we battle:  in the Tub!"   Then Shannon pulls out two fish shaped squirt guns and she and the Knight squirt each other, and the audience.

After that, the pattern repeats.  We used the same Fanfare sound effect to announce each new person, and that worked well to solidify the pattern.  King comes in with a loaf of bread and Queen Bidgood shows corn and grapes (or whatever food props we had in there).  Jester brings a net and Queen Bidgood has one two, plus fish puppets she's caught in them.  When we planned this I pictured all the kids in the increasingly crowded tub joining in each activity, but that was just a little too much for them to manage, and it was fine to just have the new tub arrival do the actions.  With the Princess, it's "Dance in the tub!" and our sound effect is a clip from "The Hustle" by Van McCoy and the Soul City Symphony  (summer of '75....seems like only yesterday).

For the ending, in which the Page pulls the plug, we added one more sound effect:  Tub Draining, and Shannon led all of the kids out of the tub.  Although it's a perfect ending on the page, we seemed to need something a little more definitive to close it out.  So we tried:  And that's the story of Queen Bidgood's in the Bathtub....she finally got out!"

We didn't quite get the whole story, but here's a rough excerpt video of Queen B: