Frog and Toad and the Story

Story:  "Frog and Toad: the Story"  from the book Frog and Toad are Friends by Arnold Lobel
Puppets:  Frog and Toad (or two frogs will do)
Props:  Squirt Bottle
Presenters:  One (with puppets) or Two (as an Act-Out)
Audience:  Family Storytime
Link to "Storytelling with Puppets" video demo

This may have been the first story I ever told with puppets.  The Friends of the Pleasanton (CA) had just paid for a couple hundred dollars worth of Folkmanis puppets for us, and I had never really done anything with puppets.  We chose wisely, though, and got two Frog puppets (in those days there was only one Folkmanis frog option) thinking Frog and Toad might be a possibility.  I was still too unconfident to try them until I heard Mr. Lobel reading his own stories on tape (books on tape:  that was kind of a new thing back then in the late 80's).  He brought them to life so perfectly, I decided I should try. 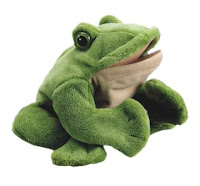 "The Story" seemed like the simplest to tell.  Frog doesn't feel well, so Toad tries to think of a story to tell him, and tries some silly stuff to generate an idea:   He walks back and forth:  very easy to do with a puppet.  He stands on his head:  pretty easy too.  He dumps water on his head:  okay, this one was a little harder.  It's kind of awkward to make a hand puppet look as if he's pour water on his own head....they don't have the reach.  So, remembering the advice of Beckie Brazell, an experienced teller and puppeteer, that "if you ever have the opportunity, squirt the audience with water," I had Toad get a squirt bottle and squirt himself...but mostly he misses himself and gets the kids.  Finally Toad bangs his head against the wall, which is pretty easy:  I just use my knee or the chair or whatever as the wall.

Each time Toad does his thing, Frog jumps up from bed to stop him.  So there's some nice pacing there, as Toad gets progressively more manic while Frog gets more concerned.  Which leads to the neat ending twist, where Toad feels poorly so Frog, feeling better, tells him a story.  And tells the story of a Toad who does crazy things to help him think of a story.  This gives the puppeteer a chance to run through each of the silly antics again, with Frog this time.

The puppetry is fairly straightforward, with a few touches to make it all work well.  Toad should hesitate a bit before each new action, giving the kids some time to anticipate.  For the water squirting bit, I slip one hand out of Frog to work the squirter, while the other hand still has Toad, but that's simple since Frog is just resting.  Other than that, it mostly comes to life through the words, the plot, and the voices...the voices don't have to be wildly unique, just enough to suggest a bit of silliness in Toad and a more sensible, regular voice for Frog.

This is also a great story for a two-person act out.  Brad and I did it a while ago in Family
Storytime, and the physical humor with puppets is enlarged with real people.  Crashing into the wall is especially fun.  I used to be able to stand on my head and used this story as one opportunity to show off that talent in the role of Toad, but I don't do that anymore....we changed it to "holding head upside down," which even I can manage and is still pretty funny.
Posted by steven at 8:21 PM