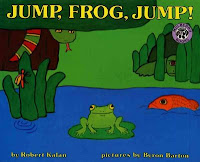 This picture book works great as a read aloud and there’s even a big book version of it for larger crowds, but I still like to try it with puppets. It’s an easy one to do, and works so well because in involves three sure-fire puppetry moves: the Pop-Out, the Freeze, and the Chase. I used it recently with two very different groups of under-3’s, and I also do it for preschool a lot; each way is slightly different, but the essence is the same:

The puppets are in my bag on my lap or in front of me. I hold up the fly (“this is the fly that climbed out of the

water”) and then pop the frog out (“This is the Frog that was under the fly…how did the frog catch the fly?). The audience provides the “Jump, Frog, Jump!” refrain each time, and it’s an easy enough one for 1’s and 2’s to get. And since the Frog jumps only after they say it, it really makes them part of the story…if they don’t say it, the Frog doesn’t jump. With preschool ages, you can keep the Frog still the first time they tell it to jump, then ask them to say it louder, and you’re guaranteed a rousing refrain from that point on.

After the Frog eats the Fly, it’s just a matter of bringing out each animal one at a time. As they Pop Out, you can hesitate a bit to make sure they’re wondering what the next animal will be. And you can reveal a portion of the puppet, like the Fish’s tail, which parallels the illustrations in the book, where the next animals to come can be spotted hiding. The Freeze is fun with this story. After Turtle appears, for example, you can have him slowly loom up to Frog as you say “How did the Frog get away” again. Then “freeze” the puppets, so the action stops while the refrain comes…you can also have both animals look quickly at the audience then back to each other in a Double Take…kind of like Wile E. Coyote looking at us just before the anvil flattens him. As for the Chase, that’s optional. I don’t do much chasing with a younger audience, but you can have each animal make a lunge or two (or three) at Frog as he jumps away just in time.

It sounds like a lot of puppetry, but it’s really pretty simple, and it flows naturally from the way the story is told. The structure of the tale is so tight, it gives you room to play a bit with motions and puppet interactions while still keeping you on track within the pattern. The book wraps up with frog caught in a basket, then being set free by one of the boys. With puppets, I do have a child puppet trap Frog in the basket, but then I tell the group that we are going to set him free, and we’ll have to do it quietly, in a whisper. It's always nice to find a story that can be as loud as you want in the middle and quiet everyone down at the end.

Here are a few adaptations I make from the book and for different audiences:
• For younger kids, I don’t repeat the cumulative string of animals with each escape, I just mention Frog and whoever’s after him. 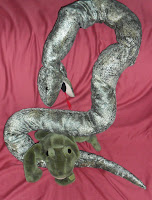 • I skip the Snake with under 3’s. If I had a cuter snake I might include it, but although my snake is excellent, it’s not cute.
• With my Toddler Time group of 25 1’s and 2’s, plus their grown-ups, I used a long net to catch Frog. Lots of fun, but a couple of boys were almost too interested in trying that net themselves. A plain old basket is less distracting, and that’s what I used when I did the story at the Early Head Start at Coffee Creek Correctional Institute, which we visit twice a month. Those kids are a little less used to storytelling and more unpredictable, so I generally keep things tamer with them.
• I’ve also done this as a stage puppet show, which also works well. With a stage you can really have fun with the Chases, plus you can play a bit more with the next animals peeking out before they make their entrances.
Posted by steven at 9:58 PM