Runaway Bunny with Some Props, but Not All 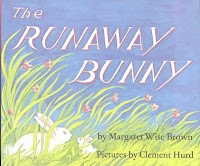 
I’ve done The Runaway Bunny with various levels of puppets and props over the years, and I think the lates

t version, which I tried in Toddler Time last week, is about where I like it. Streamlined considerably from early versions. I used to have a small bunny puppet on one hand with a mother puppet on the other. Now I just throw on some bunny ears and be the mother. It’s much easier to manipulate the props that way…also funnier I think. Then I just go through the dialog of the book, bringing selected props out of the bag as I tell, but just acting it out without props if not required. 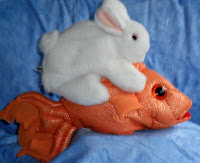 Bunny is a Fish / Mother is a Fisherman: Bunny rides a fish puppet / Mother pulls out a stick with a carrot attached to be the fisherman.

Rock / Mountain Climber: Bunny pulls out a rock (green Styrofoam brick), but Mother just climbs up towards him…a rope was just too awkward. 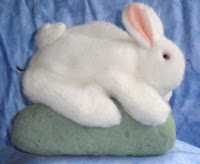 Crocus / Gardener: Bunny holds a plastic flower / Mother just looks for him…I used to have a little toy watering can for her which I would have used if I could find it, but really it works fine without.

Bird / Tree: Bunny flies up on a bird puppet / Mother grabs some plastic leaves to be the tree…grabbing a potted plant that looks kind of like a tree works visually, but it’s heavy and awkward so I don’t bother anymore.


Boat / Wind: Bunny gets a toy plastic boat / Mother takes a breath and puffs him along in the right direction.


Trapeze / Tightrope Walker: Propless Bunny swings back and forth / Propless Mother stands up and pretends to tightrope….okay, this one I kind of miss the more complicated version, where I would tie yarn to both sides of a pencil, then attach the bunny to it with tape and swing him back and forth so it really was like a trapeze artist. But because scotch tape and puppets are generally not compatible, he would frequently lose his grip and fall to his death, which just doesn’t fit with the tone of the story.


Child / Mother: Bunny grabs a boy puppet and runs to the arms of Mother (the librarian with the bunny ears, in case you’ve forgotten).


Doing this with the basic props above or with some more added back in, it’s a real satisfying presentation for young kids. I like the way it works with the book too. Many families know the story well enough, so seeing it played out with puppets is an intriguing extension. And the pattern and language are strong enough for two year olds who don’t know the story to follow it, even though the imaginative shifts are so frequent. And I hope they’ll then explore the book afterwards.
Posted by steven at 3:57 PM