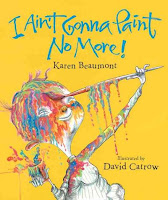 
Our Family Storytime groups are too big to see the great David Catrow illustrations showing the many ways the mischievous kid paints himself in this book. So Brad drew a life-size version of the kid with a marker on white butcher paper, we hung him up on our big rolling white board thing, and painted him ourselves. Brad sang the song and played guitar, while I played the kid, using liquid paint in spray bottles to color his head, neck, etc. The paints dripped a bit, but that just adds to the messiness that’s part of the 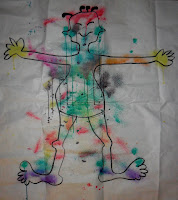 story (the real painting looks a lot brighter and more colorful than the photo posted here). The interplay between words and pictures that works so well in the book transferred over very neatly to this version. The timing worked well: The boy paints two body parts (“gonna take some red and paint my head / what the heck, gonna paint my neck”), but then there’s the chorus of the song (“ain’t gonna paint no more, no more…”) which allows me as the painter to put the paints away (cover them with a towel), walk away as if I won’t be painting again, then sneak back, take off the towel, and make a bigger mess just in time for the next verse. With the last verse I slipped the paints behind our white board without the audience seeing, so it looked like they really had disappeared.


We always do our Family Storytimes with two tellers, but this week we had a chance to attend a workshop with Jim Gill and Renea Arnold at the Oregon Library Association Conference, so after Brad and I did the tandem thing on Tuesday, I was on my own on Wednesday while the rest of out team were off at the workshop. And Ain’t Gonna Paint adapted pretty easily to one teller. No guitar, but the rhymes are simple enough to remember, so I told/sang it as the boy and did the painting too.

As for the ending, every storyteller makes their own choice about how to do: “I’m such a nut, gonna paint my – What?!” Followed by “don’t y’all faint, cause there ain’t no paint.” My style is to let the kids who get the joke giggle at it, and let it just go over the head of those whose level of phonological awareness and/or scatological humor isn’t quite there yet.
Posted by steven at 8:28 PM