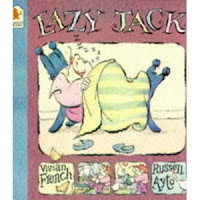 
Here’s a story I’ve told many times over the years, ever since I saw it done by Paul Rockwell from the Albany Public Library in California (and tried my best to copy his way). For our “K-2 Book Adventure: Silly Stories” program we acted it out with three people: I was Jack, Sheila the Mother, and Terri the Girl at the end. I love the way the pattern builds, with Jack getting paid with something different each time, and following his mother’s advice each time with disastrous results. The kids know something’s about to go wrong, but don’t know what. For the kids, the funniest part is Mother’s angry response, highlighted by calling him a different “N” name each time: Nitwit, Knucklehead (technically a “K” word I guess), Noodlehead, Ninnyhammer, and Nincompoop.

As we planned this we talked about using a prop or two, or maybe projecting an image of each payment Jack receives (penny, milk, butter, cat, meat, donkey), but decided against: the story really stand on its own so well that extras would just distract. We also cut out the farmer who pays Jack, went without a separate voice for narration, and didn’t bother saying or showing what kind of work Jack did each time for the same reasons: keeping to the bare bones of a surefire oral tale.

this with two or three people lets you have some fun with the interplay between Jack and his Mother. But really, it works just as well as a solo story. Even though it can be a bit long, I tell it orally at regular old preschool storytimes too. The pattern is just so strong and logical that they can hold it in their heads really well, stretching their narrative skills a bit. And although book versions by Tony Ross, Vivian French, and Paul Galdone are out of print (as is my favorite version which is in the original edition of The Tall Book of Nursery Tales (but not in the 2006 shortened reissue)), it’s fun to show kids Colleen Salley & Janet Stevens’ Epossumondas, which is a clever variant.