Pat the Bunny, Tap the Screen 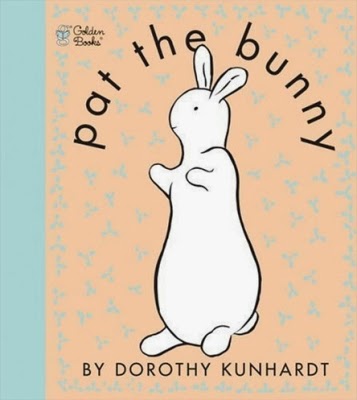 We use technology frequently in our storytelling at our library, but usually it's been PowerPoint, either to scan and project illustrations or to add different visual effects, or some combination of those.  We've been looking at picture book apps, looking for ones that really fit in with the other stuff we do.  ;Most of what we've seen didn't seem workable for our storytimes.  A few weeks ago, though, Brad and Terri used Pat the Bunny and it was a much better fit.  Their theme was "Classics," and I thought their idea of using an eminently classic book (65 years old, 6 million copies sold, ground-breaking book-making) in an electronic form was a nice twist.  It's an app that parallels the book pretty effectively, and also one that we can't share in book form in a large storytime in any other way we can think of.  Brad and Terri did a good job of thinking through the pieces of an app presentation: 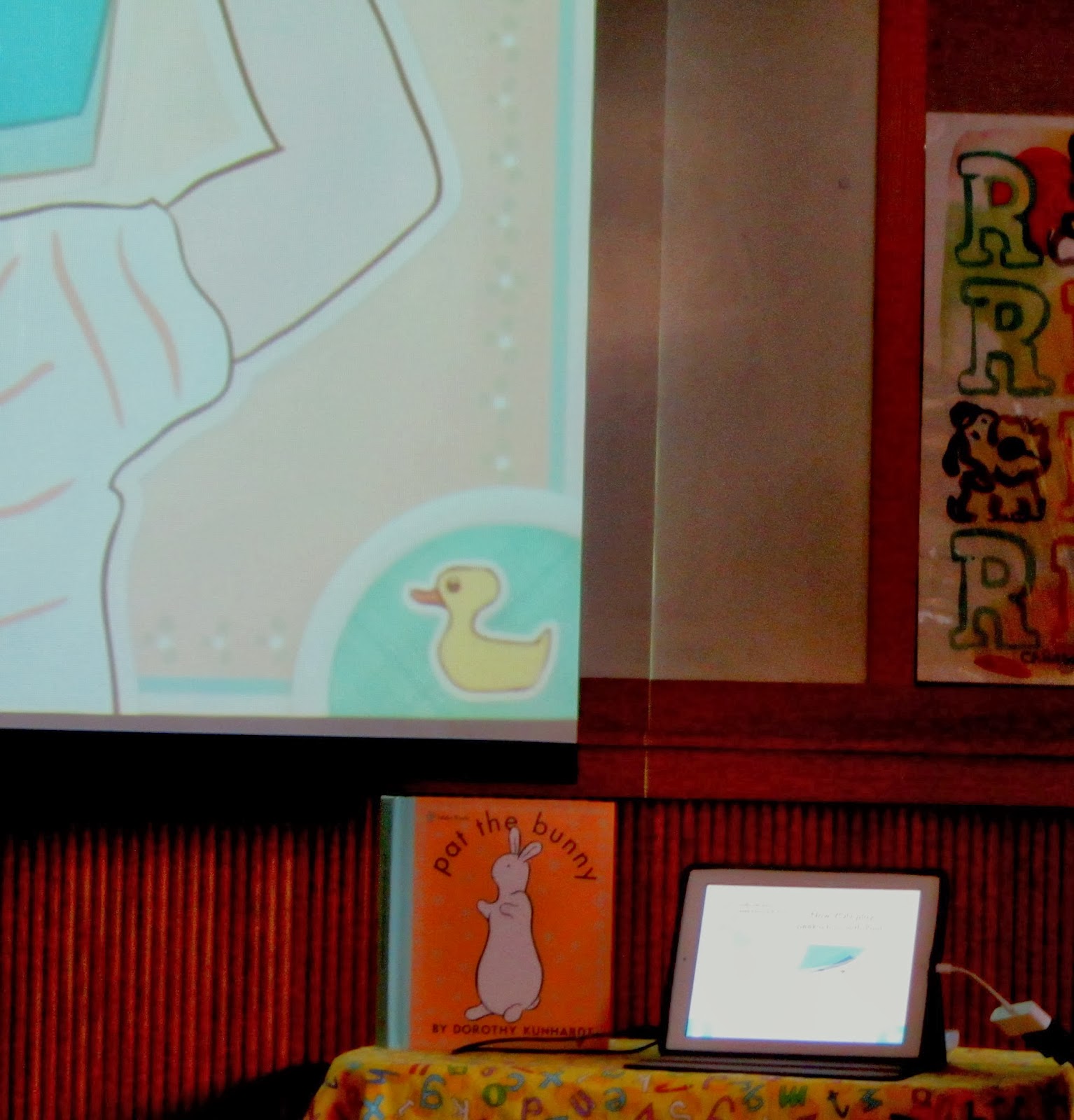 Technology:  That was pretty simple.  We used a VGA adaptor so we could project from the iPad screen onto our big screen.

Set Up:  Brad propped the ipad on a table so the audience could see it.  They couldn't see the details on the screen well, but they recognized that this was the device he was using and saw that his fingers on the iPad screen (and later the fingers of other kids) were causing the action on the big screen.  He also set the book right next to it to emphasize that print-screen connection.

Introduction:  This was pretty important.  We wanted to celebrate the classic book, and at the same time acknowledge a new format.  Brad showed the book (we bought a couple of the extra large versions), gave a bit of its history, and showed a few sample pages.  Segueing to the app, he mentioned how it's the adult/child interaction that really makes a book (or an app) come alive and that's where the real learning and engagement comes in (but he said it better than that). 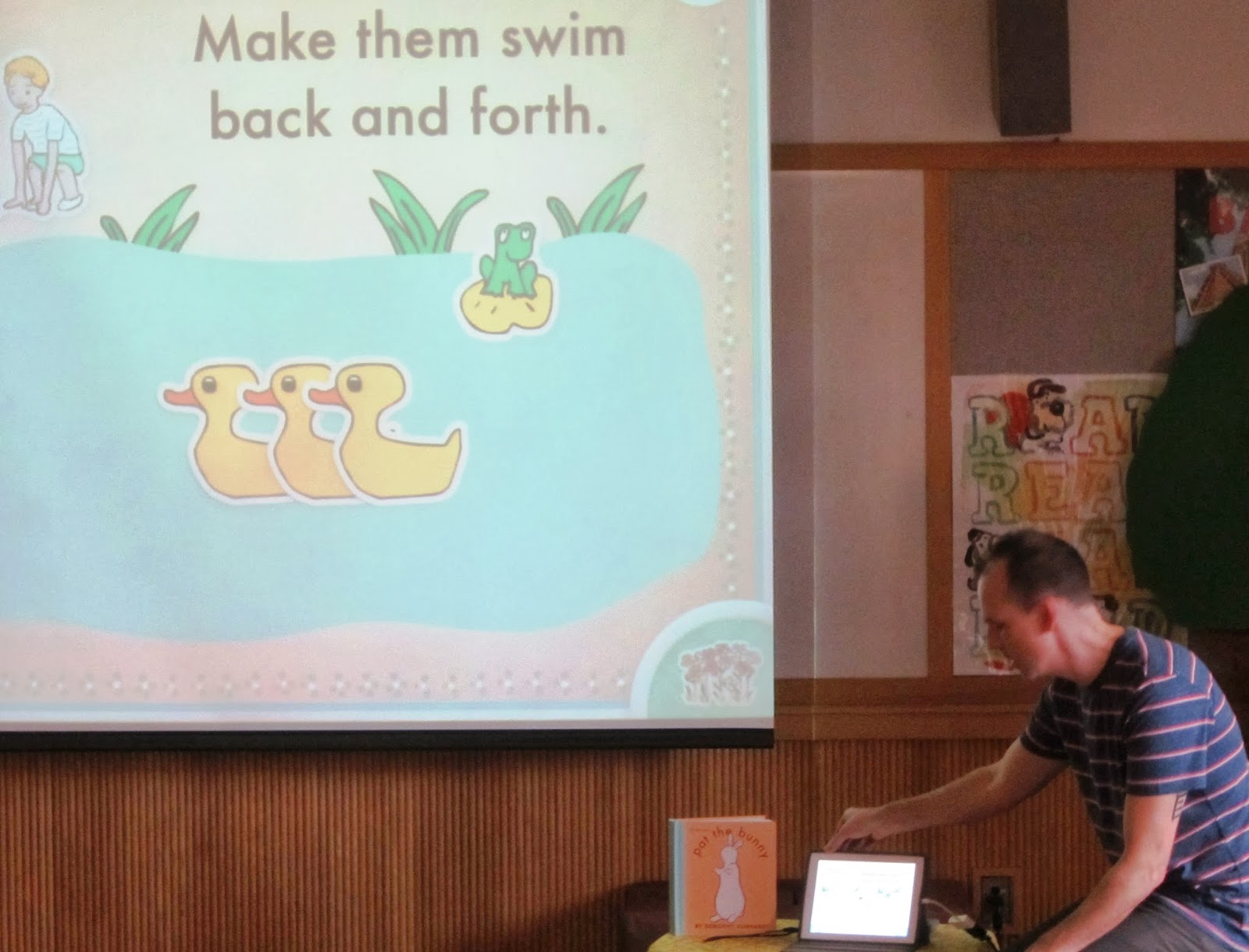 Demonstration:   Brad demonstrated a few pages from the app.  He explained each thing he was doing:  "I'm going to tap these ducks.  Watch what happens to them on the screen."  And getting interaction from the audience:  "What do you think will happen if I touch this frog?"  The goal wasn't to dazzle the kids with some cool animation and sound effects, but to demonstrate, to kids and grown-ups, how an app can be fun and interactive. 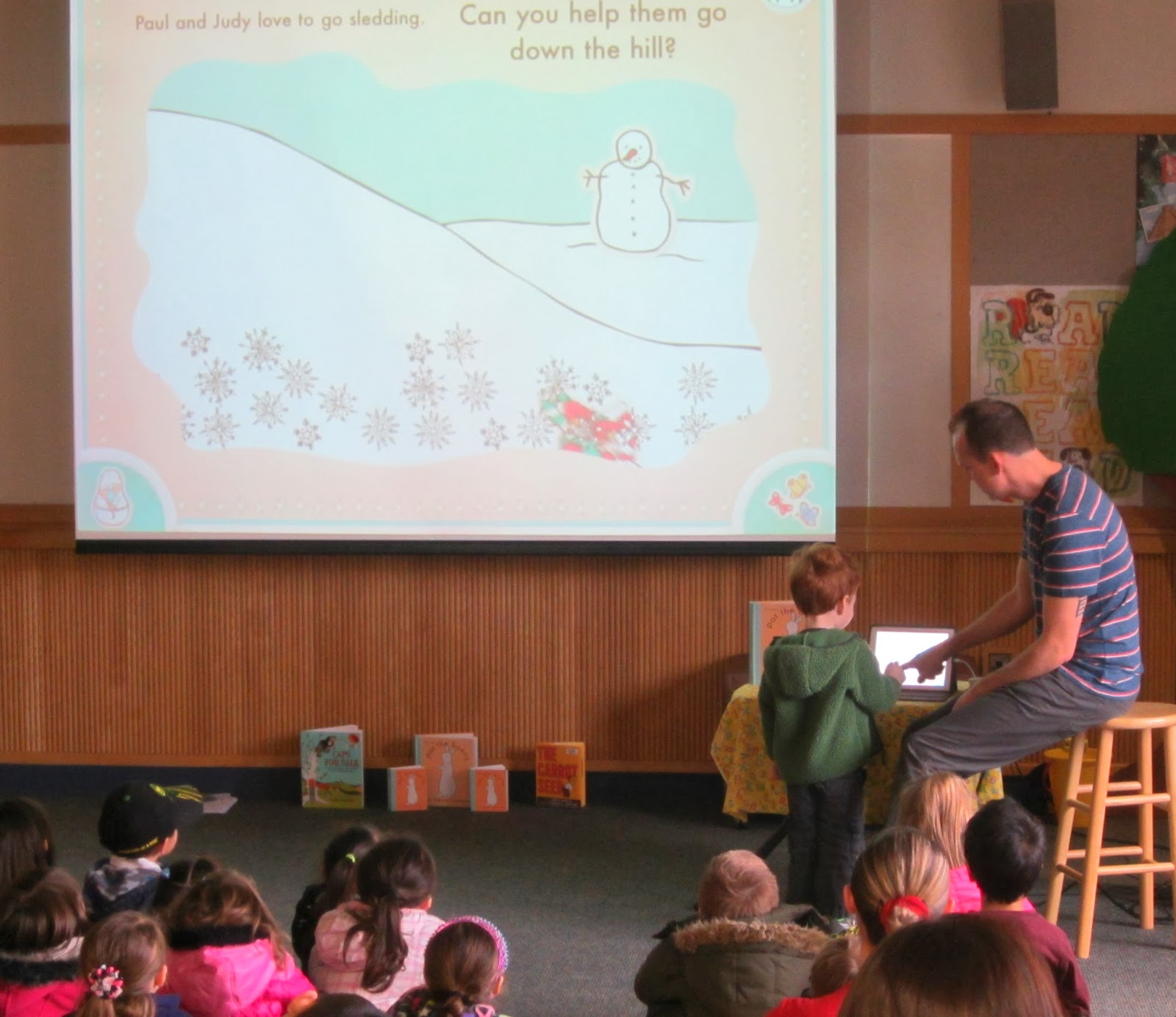 Volunteers:  After a few of those, it was time for kids to give it a try.  Terri managed the volunteers, making sure we had one at a time at the screen, plus one on deck to be the next to try.  As they arrived, Brad would help as much or as little as needed.  In some cases he could just say:  "See what happens if you touch the snowman?" and an experienced pad user could take it from there.  Other times he had to guide their hands, or even touch the pad with them.  I wasn't sure this would work.  I thought maybe that while the chosen child was having an interesting time, the audience would get bored or restless.  But the app was simple enough and Brad guided them smoothly enough that there was minimal time between actions up on the big screen.  So the audience enjoyed the visuals, and also got to see how easily kids could work with the ipad.

Follow Up:   Pat the Bunny was the last segment of the Storytime, so when it was over, Brad and Terri invited kids to come up and try out both the book and the app.  We had four copies of the book, and we had lots of kids trying out both the print and electronic version.

Patron Reaction:   I was on the Children's Desk after this storytime and asked many of the attendees what they thought of the use of an app in our Storytime.  All of the responses were positive.  I think because they're already used to seeing us use the screen in many different ways as part of our storytelling, they took it in stride pretty well.  Several people were particularly impressed with the Pat the Bunny app.  One mom said:  "we have an iPad and there's just so much out there, I don't know what's good for my kids.  We'll definitely add Pat the Bunny."  Which is similar to the reaction we shoot for with books, as we introduce

Staff Reaction:   This worked for me.  I can't think of a better way to share this book with a large group.  It flowed very smoothly within our Storytime format.  It met several of our Family Storytime touchstones:  Engaged the group; Generated excitement about literature; Was interactive;  Highlighted high quality examples of the material;  Modeled ways for parents to interact with literature; and:  Was fun.
So just as we try to introduce the best books to kids in Storytime (they also saw Caps for Sale and The Carrot Seed that morning), we can also highlight the best apps.  I don't see most of the apps I've looked at working well in Storytime, but after seeing what Brad and Terri did with Pat I'm ready to say that a well-chosen app with a carefully developed presentation can work well....and anything short of that might not be worth trying.