The Hat with Clothesline 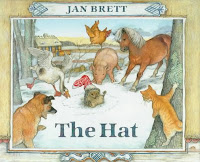 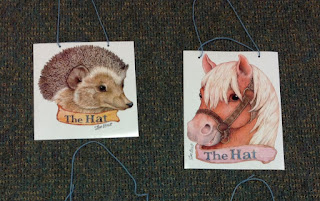 Brad and I chose to use Jan Brett's The Hat for a "clothing" themed Family Storytime.  Jan Brett's website has a bunch of great resources for teachers and storytellers, including neat and simple printouts for the animals from The Hat.  They're designed for reader's theater, but we used them in a slightly different way.  We printed out one of each, laminated, and strung some yarn through for the kids to wear.   Then we strung a clothesline across the stage.  We just tied string to two our our backdrops, but I'm sure there are other ways to work that out.

The story is pretty simple, and we simplified it a bit more to make it work with child volunteers.  Each of the kids got an animal sign and stood beneath the empty clotheline.  Brad narrated while I managed kids and clothes.  One by one, I pull each piece of clothing out of a basket and hang one above each animal.  Then Brad describes how the sock blew off an fell on Hedgehog.  And I unclip the sock and place it on Hedgehog/Child's head.

Then it moves to the other animals seeing Hedgehog's cool "hat," and wanting one for themselves.  And one by one, the animals spot the clothes above them and I put each one on their head.  We considered not revealing the clothes until it was time for each child to "wear" it....keeping the shirt in the basket, for example, until it was that animal's turn for a hat.  It actually was much more fun to have all of the clothes in sight from the start, though.  You could watch it all dawn on the audience in different stages, as they anticipated that each child would soon have a silly hat.  The child volunteers went through the same process, as they put the pieces together and realized what they were each about to wear.  Of course, leaving the underwear for last build up the suspense even more.  I really wish we'd taken a photo of the kids, before the "hats" and after, but I think you can imagine it.

The story ends with me coming to take down the clothes, spotting the silly looking animals, and collecting the pieces one by one.  This is one of those stories where the props and the kids really make it work.  Though Brad and I split up the narration and child/prop management, those could easily be done by one person.  So all you really need is a clothesline, a color printer, and some cute kids.
Posted by steven at 10:09 AM