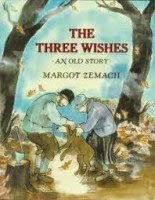 I did The Three Wishes once as a puppet show long ago, when I was just starting.  As I remember, I had technical difficulties with the sausage-on-the-nose-of-puppet, so I never tried it again.  I think by now I could work out those problems, but for a recent Preschool Stories and Science session, we did it as a two-person Act Out, and that was much easier.  Sheila and Terri developed the story, but when Sheila missed a day unexpectedly, I got to step in.

Like many folktales, sticking to the bare bones of the story works best with a mostly-preschool audience...and the bare bones are the best parts anyway.  Sheila found a nice accordion music clip to use in the beginning.  It has a nice folktalish feel.  As the Woodcutter, I grabbed my ax and narrated myself into the woods to chop down a tree.   Terri was behind our big tree (which we use for so many stories....if you want to make one big cutout prop to help with a lot of different acted out stories, definitely consider a tree).  As the Elf, she spoke from behind the tree a couple times just as I was about to chop.  Then the puppet popped up and explained that if the Woodcutter spared his home, he would grant three wishes.  Sheila added a nice magical entrance sound effect  to play when the Elf entered and exited. 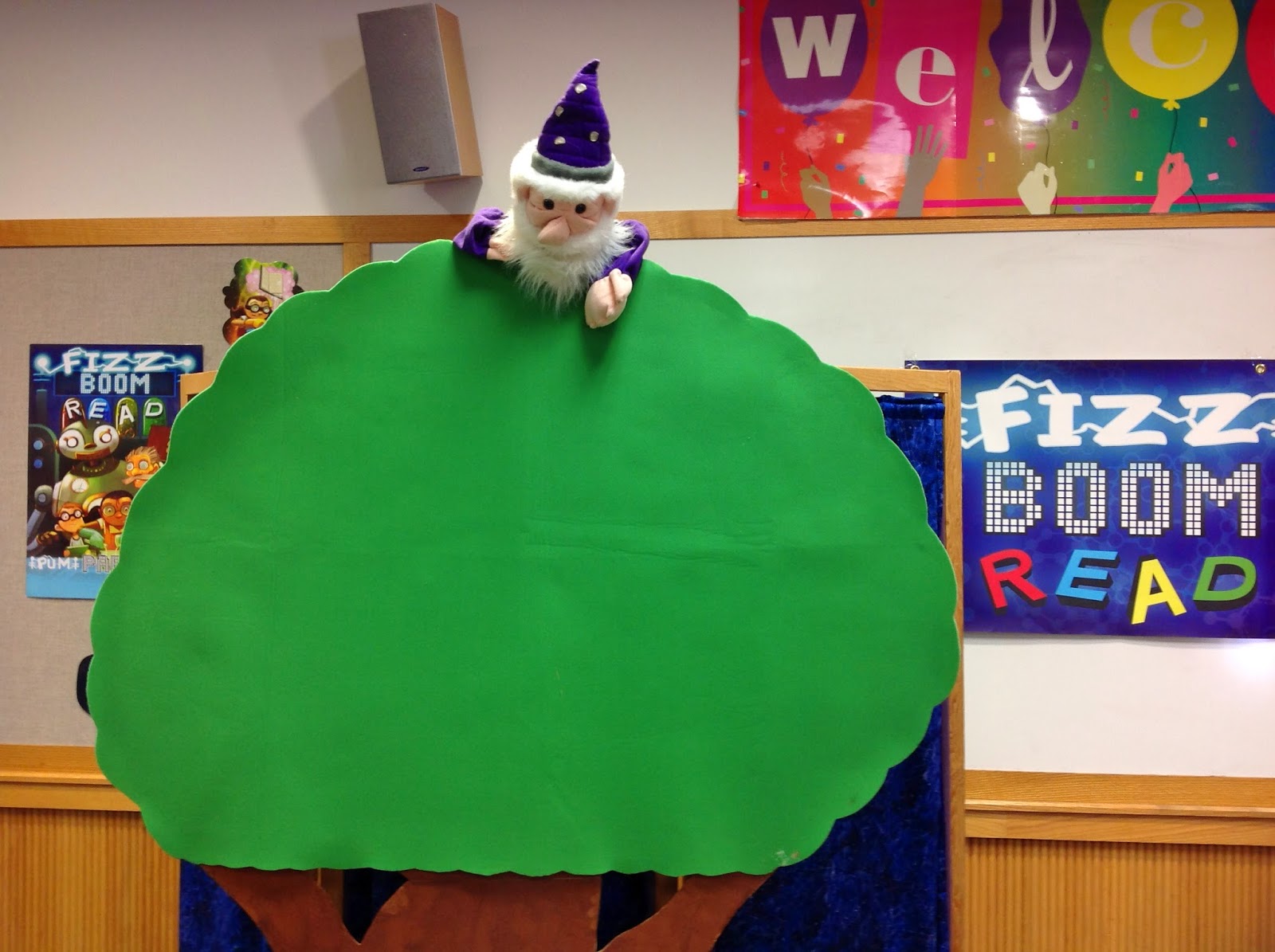 As I walked away from the tree and back home, Terri walked inconspicuously from behind the tree to behind the home, kind of pretending to be sneaking when it was obvious that everyone could see her.  When you don't have trap doors and underground passages (maybe next year's budget?) for seamless transitions, it's fun to let the audience in on it and have them laugh along with you. 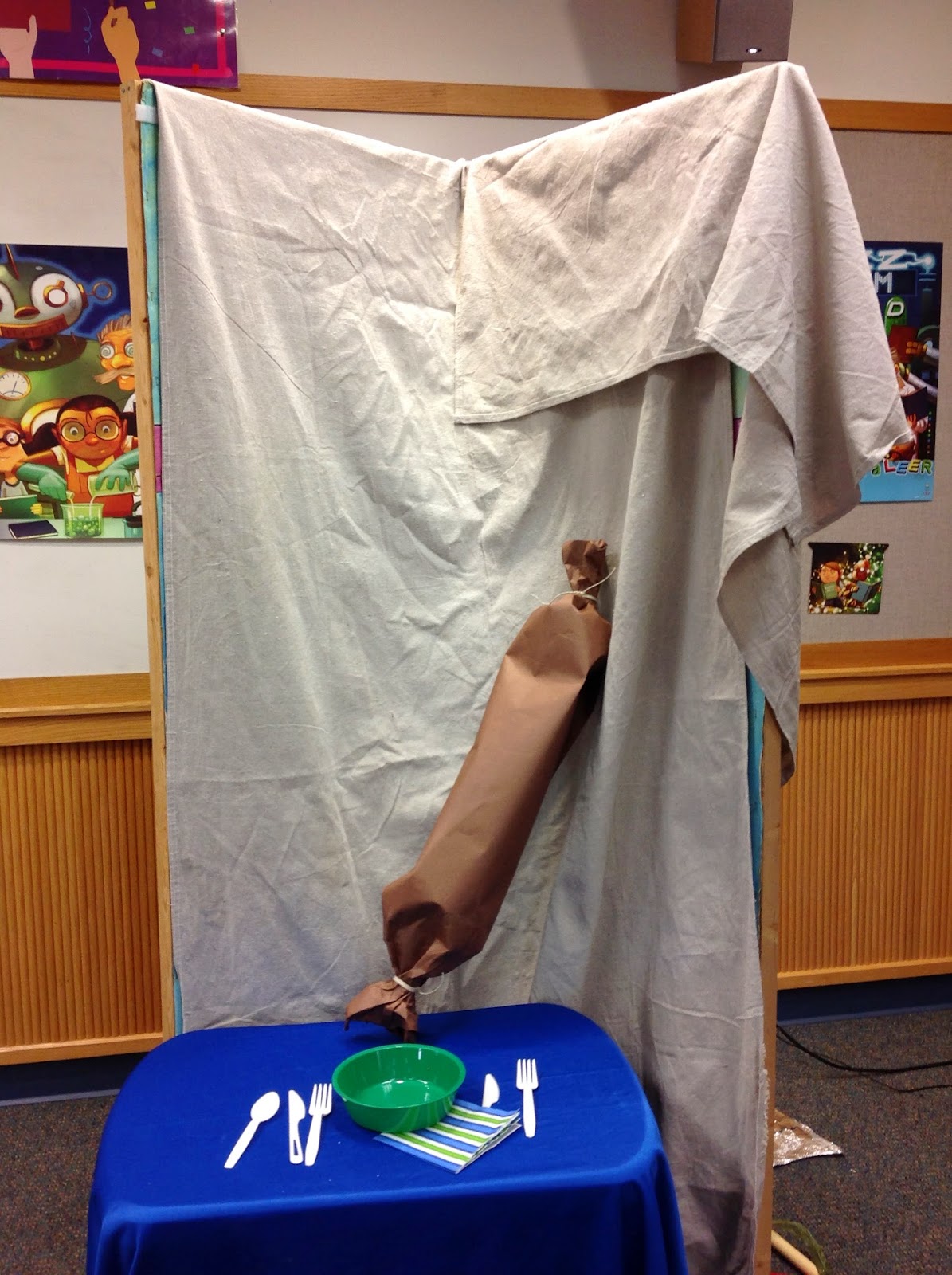 Once home, the Woodcutter is hungry, so I wished for a sausage.  From behind the screen, Terri tossed the sausage over the top.  It's just a construction paper creation, attached to a fishing line so she could control the landing onto the table.  Sheila had added a spring-y sound effect for the sausage's appearance.   Then Terri came out as the Wife, and we went through the back and forth argument about wasted wishes.   When she wishes it was stuck to my nose, we click on the sound effect again and up comes the sausage.  To attach the sausage to my nose, I just held it there:  technical difficulties solved.  Our argument continues as the Wife tries to pull the sausage off of the Woodcutter's nose, with some funny tug-of-war/back-and-forth movements, then she picks up that ax and nearly chops it off.

In the end, of course, they use the third wish to remove the sausage, and at least have a nice meal to show for it all.  We pretend to eat the sausage, the accordion music comes back, and we finish with a final sound effect of a loud burp.  That one is optional, but it did get some laughs.