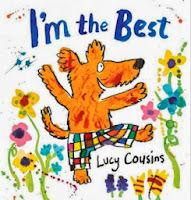 This Lucy Cousins story has a pretty simple structure and a character whose defining trait (self-centered, conceited) is fun to play around with.  Sheila and I did this using puppets.  We thought about doing it from behind the stage, but decided we needed to show the actions of the animals more broadly. So we were on stage with puppets on our hands.

Sheila was Dog, who thinks he's the best.  Following the book, we told it all in dialogue, so she had to show dogs conceit through her voice, but also lend a bit of silliness to it so he came off as more childish than mean. After his opening brag, each of the animals come out for a contest.  We switched a puppet or two to match what we have.  Actually we switched everyone but Ladybug.  But it works the same:   Dog has a contest with the animal, and outruns Frog, outswims Horse, outjumps Duck, and is just way bigger than Ladybug.  Those were all simple to act out with puppets, and easy for the kids to get what's happening.

Then after Dog has hurt everyone's feelings, they come back and have a different series of contests, playing to their strengths:  Duck outswims Dog, Frog outjumps him, etc.  Then, because Dog's sad, his friends cheer him up by reminding him that he's the best at being their friend.  If that had been the end of the book I would have been disappointed, but fortunately Dog finishes with one last brag about how his fluffy ears really do make him the best.  I mean, it's fine to have a positive message and all, and I do believe Dog really did learn something, but at a certain level, a dog that full of himself is just going to be that way no matter what.
Posted by steven at 9:45 PM