Our latest attempt to act out an "Elephant & Piggie" story is one that Sheila and I first did as an outdoor story at the City's Art Fest. It's a little prop-heavy for an outreach performance, but Sheila had all the stuff and it worked fine, it's just that the crowd was small.  Small crowds were not a problem last week when Sheila and Terri did  it for their "Preschool Stories & Science" presentation. 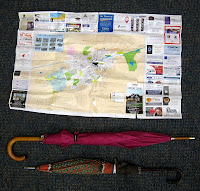 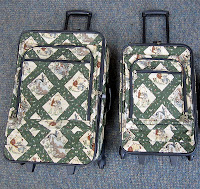 We do this one as an act out, following M.W.'s just-right words as usual.  For props, they had a three-bag set of suitcases, a couple of umbrellas, a couple of sunglasses, and a bunch of old maps set behind our backdrop.  Piggie goes and fetches each one as the story progresses.


E & P decide to go for a drive and share an excited:  "Drive, drive, drivey, drivey, drive!"  Gerald's the planner in this one and reminds Piggie that they will need a map.  When Piggie returns with the map it's:  "Map, map, mappy, map, map!" and again "Drive, drive, drivey, drivey, drive."  A refrain that repeats with variations and more props as the story continues which works great for audience participation and for storytelling.  (Also for beginning readers using the book, further evidence of Mo's genius).
As always with Elephant and Piggie, capturing their distinct personalities is a big part of it.  Sheila's been Piggie many times, but still uses the specific illustrations with each book to help her get Piggie just right...the expressions in the drawings really do show you just how to play them.  Terri adds a nice storyteller's touch to Gerald that I hadn't thought of when I performed it.  When he declares:  "Get those maps!"  (or "sunglasses," "umbrellas," etc.) she hesitates a bit and prompts the kids to join in.  It brings the audience even further into the story, highlights a key refrain from the book, and just as importantly, gives Piggie just a little more time to grab the props and return. 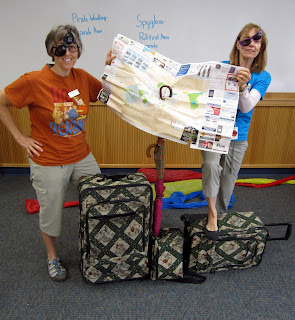 The ending is great in the book and works in the act-out too.  After both characters realize that they everything they need for a drive except a car, they decide to use the stuff they've gathered for something just as fun:  they can play pirates!  Here's where an illustrator has a distinct advantage over storytellers.  Mo's pictures clearly show the pirate ship they make, and those sunglasses really do look like pirate patches.  The transformation we do requires a bit more imagination on the part of the audience.

We unzip one suitcase just enough to prop one umbrella up, then fit the second umbrella into the folds of the first one.  One big map with a precut hole is used for the sail.  With our big crowds of 130 or so it's a bit hard for all to see the suitcases on the ground, but putting them up even on a small table just seemed too unnatural; you don't construct a suitcase/umbrella/map pirate ship to look at:  you want to climb on and sail it.  So we kept them on the floor.  To make the conclusion work we veered from the book a bit.  E & P make the transformation from car trip to pirate ship wordlessly, but we narrated a bit to make sure the kids, especially the younger ones, could follow:  "...if we spread this map out, it's like a sail!...I can make my sunglasses look like an eyepatch!..."
The only downside to doing an Elephant and Piggie in the summer:  There aren't enough books for kids to checkout after the story.  We own 96 copies of E & P and had 6 on the shelf, all checked in just that day.  So clearly the guy who orders early readers  needs a good talking to (oops, that's me...I'll go place an order now.)