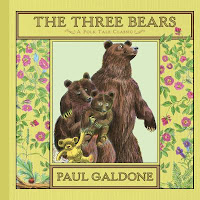 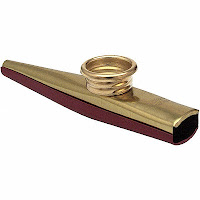 For our second annual "One Story Three Ways" Storytime, we presented three versions of "The Three Bears."  The idea for the theme comes from The Oklahoma City Storytelling Festival.  Last year we did "The Three Pigs," and although we're not committed to doing tales about three animals forever, it just worked out that way again this time.

We opened with "The Three Bears with Kazoos," which is described in an earlier post. 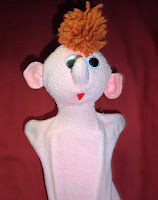 Version two was "The Three Bears with Puppets," an almost straight version of the tale, but with mistakes thrown in.  I've done this as a solo puppet show and it's a little complicated for one (lots of puppet switching), but we had the luxury of using three, and we took advantage.  So Terri narrated in front of the puppet stage while Sheila and I worked the puppets from behind.  There's a bit of delay between Terri's words ("There was Papa Bear...") and the puppet's appearance, which sets up the jokes as every now and then the wrong thing pops up.  Such as:  "There was Baby Bear".....and a human baby puppet pops out.  Then Terri corrects the mistake:  "No, I said Baby Bear, not a Baby!"  When Baby Bear is supposed to pop out the next time, it's that Baby puppet with no clothes ("Not a bare Baby, a Baby Bear").  And we had a kind of similar routine using our big stuffed Broccoli, which popped up a few times instead of porridge.   And when it's finally over, Baby Bear smacks Terri on the head with the broccoli.  Good old fashioned puppet show humor.   We didn't go too far with the props:  we didn't use chairs, just had Goldilocks sitting in different places; for beds we had a too hard cardboard brick, a too bouncy cushion, and a just right pillow. 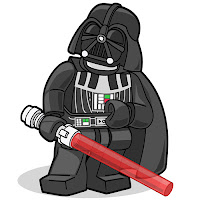 Our third version was not so old fashioned.  It came from the very creative mind of Brad, who comes up with stuff I could never dream of.  In this case:  "The Three Bears with Star Wars Guys."  For this version, Brad recorded the narration (because he can do all of the funny voices) and the rest of us acted out the parts with masks and props.  Papa Bear = Darth Vader, Mama Bear = Yoda, Baby Bear = Chewbacca, and Goldilocks = Jar Jar Binks.  A short video clip is below.  This was a great way to end it.  Lots of preschoolers really know Star Wars these days (it's the Lego influence I think) and even for those who didn't, the voices and costumes were fun, plus of course it was framed within the familar story structure they'd just seen two times.  We took some heat from one five year old who was visibly upset that we would portray Darth Vader with a blue lightsaber when it should have been red.  He seemed to have no problem with DV and Yoda sharing a bowl of Sarlacc Stew, but clearly the lightsaber error was unacceptable.

Brad has great ideas, and then he also adds just the right touches.  He created handheld masks and placards we wore around our necks (those used Lego images to be more recognizable to the younger kids), developed a script that retained just enough elements of the three bears, and did all the voices and narration, recording them with music and everything.  He had to miss the presentations sampled below, and we had a couple of other people out sick, so that's Andi (Adult Program Manager) as Darth Vader and Sam (On Call Librarian) as Yoda, both stepping in and doing a great job, plus me as Chewbacca, and Sheila as Jar Jar.  Brad, who does shows for libraries and other venues around the Pacific Northwest (contact and booking information here) also performs this as a solo act, which I haven't seen yet but will get to soon I hope!   Here's the clip from our version:

Now that we've done it twice, we're committed to doing "One Story Three Ways" every year I guess.  Not sure what we'll try next time, but I'm kind of wondering what kind of silliness we could come up with a bridge, a troll, and those three Norwegian goats....﻿