Our January K-2 Book Adventure program featured "Trickster Tales."  The core of this program was four tales, and we mixed up some other "tricky" books to provide variety.  The tales included Gerald McDermott's Raven and Anansi and the Moss-Covered Rock by Eric Kimmel and Janet Stevens...click on the links to see details of those.  One nice thing about those two books is Kimmel and Stevens have done several other Anansi tales and McDermott has a series of trickster tales that have a similar look, so we gathered multiple copies of those as well and most of them checked out.

For Thatcher Hurd's Mama Don't Allow we brought kids up from the audience to be the "Swamp Band."  Terri was Miles, I narrated, and Sheila was a hungry Alligator.  In the book, parents and townspeople comment at how awful the band sounds, so we projected their comments in word bubbles on the screen ("Play outside!"  "How dreadful!") and had the audience read them. 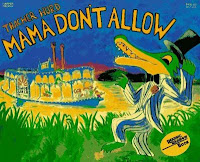 "The Dancing Gator" was adapted (very broadly)  from "Buh Rabby and Bruh Gator," a story in Virginia Hamilton's A Ring of Tricksters.  This has been a long-time favorite of mine to tell with puppets, but my first chance to act it out with a partner.  I'll try to do a full blog entry on that one in the near future.  A Ring of Tricksters isn't easy for younger readers to manage, but it has some great readalouds for adults to share, and I was pleased that several copies got checked out.

In between the four tales, we highlighted books that were tricky in different ways.  One of our goals or this K-2 Book Adventure program is to expose kids to a wide variety of books, including non-fiction, picture books, poetry, and anything else that fits. 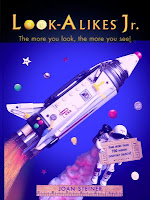 "Tricky Photographs":   For Look-Alikes Jr. by Jan Steiner we scanned three of the illustrations, projected them, and had the kids identify the everyday items that are used in the amazing photographed scenes.  We'd name an item ("where's the spatula on the rocket?") and then with a PowerPoint click we'd add an arrow pointing right to it.  And of course we had the others in the series available too.

"Tricky Words":   We scanned and tried out a few tongue twisters from Alvin Schwartz's Busy Buzzing Bumblebees (illustrated by Paul Meisel), which is just right for this age group.  And had more tongue twister books on hand for checkout. 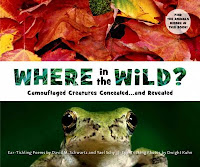 "Tricky Nature":  We used the very cool book Where in the Wild (David M. Schwartz and Yael Schy, photos by Dwight Kuhn).  In the book, you see a photo with a camoflauged animal, then turn the page and see the same page with everything but the animal visually muted.  This worked great when transferred to PowerPoint and used with animations.  We scanned both pages and had the front one very slowly "Exit/Dissolve" while the next page very slowly "Enter/Dissolve," so you'd gradually see the hidden green snake emerge.  Another of those rare cases where I have to grudgingly admit that technology works as well as the printed page (but you still can't feel it or smell it).

And since we never expect this group to sit still for 45 minutes, we added a "Tricky Game," to get them moving, a variation of "Simon Says" that Terri led.  There are times when working our themes into a cohesive program takes some struggling, but this time the combination of tricky tales and tricky non-fiction seemed like a nice and natural mix.
Posted by steven at 10:12 PM