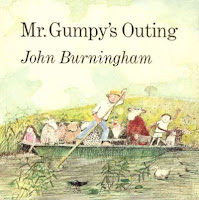 A series of animals comes one by one to join the outing.  Mr. Gumpy allows each one to climb aboard, but always with a warning (“don’t muck about” to the Pig is my favorite).  Off they go, and everything’s fine until…”the pig mucked about…the dog teased the cat…the child squabbled…and the boat tipped over and they all fell into the river.”

It’s a simple, natural telling with puppets.  Each hopeful passenger pops out of the puppet bag, interacts with Mr. Gumpy, and gets into the boat.  The boat can be a flat box lid or tub lid.  Even better is a flat surface with short sides, like a soda can case box or a wide, shallow plastic lid, so you can prop some of the passengers over the edge.  Even so, some of the animals don’t really stand up that well once they’re in the boat, but that’s okay, I just pile them in.  At that point the audience is focused on the next animal, and just need to see that the boat is getting more and more full.  When the boat tips over, of course, you just dump all of the puppets onto the floor.  A fun moment, especially with toddlers because they don’t quite expect you to do that with puppets.


After the spill, they swim to the shore, dry off, and join Mr. Gumpy for tea.  A very comforting conclusion:  yes, everyone did what they weren’t supposed to do and caused a disaster, but they all just decide to make it part of a fine day anyway.  I actually think everyone in the boat knew this would happen all along and were even looking forward to it, including Mr. Gumpy.


The dialogue between Mr. Gumpy and the animals if fun, as the not always familiar language (“mustn’t squabble”…”don’t trample”…”don’t muck about”) catches the ear and the attention.


I used this presentation with toddlers a couple weeks ago, but the story also works well on a larger scale.  For our Family Storytime, we’ve acted it out with one narrator, one Mr. Gumpy (with hat and long pole), a cut-out boat that leans against chairs, and kids joining the boat as the passengers (with puppets or other props).  In fact, we like the story so much, Terri and I even performed it for adults at a recent Library Foundation dinner, to give supporters a sample of what library programs are like….
Posted by steven at 8:47 PM