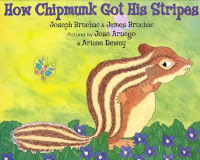 Book:  How Chipmunk Got His Stripes by Joseph Bruchac, Illustrated by Jose Aruego & Ariane Dewey

Puppets:  Bear, Chipmunk, (plus a second Chipmunk if you’ve got one)
Props:  Safety pins
Presenters:  2 or 1
Audience:  Family Storytime 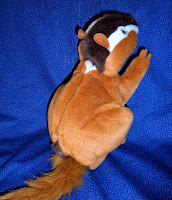 Terri and I told this one with puppets during Family Storytime.  I’ve done this solo, but it works even better with two.  Chipmunk has no stripes when the story starts (he’s called Brown Squirrel), so we folded the puppet’s stripe in and safety pinned it.  We considered acting it out or using the puppet stage, but felt it worked best with us just holding the puppets.  We could have used audience volunteers for other animals or props and/or lighting to show the sunset and sunrise, but we really liked its  strength as an oral tale so we decided against any extras.  Terri switched between narration and Chipmunk; I was Bear. 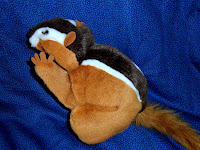 In the story, Bear brags that he can do anything.  Bruchac has an excellent storyteller’s refrain:  “I am Bear, I am the strongest…I can do anything…hummph!”  This is fun to do with a puppet, swinging Bear a bit to give him a swagger, and really punching the “hummph!” each time to convey his personality.  Terri used a high voice for Brown Squirrel and added a little “Wheee!” each time he finished a verse, which was just right.  The clearly contrasting personalities make it easy and fun for the kids to follow.  When Bear makes the sun go down, we just all looked over to the west of the room, then turned to the east side of the room to wait for it to come up.  Which Bear is sure won’t happen:  “The sun will not come up….hummph!”  But Brown Squirrel knows it will “The sun will come up….wheee!”

Terri and I are sitting on a bench with our puppets at this point.  When Brown Squirrel teases Bear too much, we have a little chase.  We made sure to slow it down and not make it too wild.  Bear takes two good leaps at Brown Squirrel, missing both times.  Then as Brown Squirrel ducks behind the backdrop (his hole), Bear gets him with a good scratch.  While Bear tells the audience that he almost got Brown Squirrel, Terri is behind the backdrop taking out those three safety pins as fast as possible.  Bear goes off to the opposite side and Brown Squirrel returns, now with stripes showing, and explains that he is now “Chipmunk, the striped one,” who’s always up early.  Bear returns to explain that he sleeps late, to avoid Chipmunk’s noise, and to forget the timed he learned the lesson that “nobody can do everything.”

This is one of those folktales that’s just right for the 3-5 year old crowd (and older kids as well).  Two distinct characters, humor that they get, and an explanation at the end that really makes sense.  It’s a good one-person puppet story as well, though you can’t have quite as much fun with the chase.  The safety pins are a bit harder to manage solo as well.  I actually have two identical chipmunks, so can just trade out for the second unpinned one.
Posted by steven at 7:07 AM