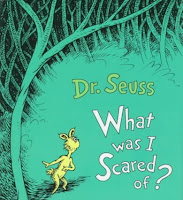 Story: "What Was I Scared Of?" by Dr. Seuss (from The Sneetches and Other Stories)
Props: Green Pants, Bucket, Spinach (green paper), Fishing Pole
Participants: Narrator, Guy, Someone to move the Pants
Audience: K-2
My favorite Dr. Seuss story when I was a kid was also my scariest. It’s called “What Was I Scared Of” but I always think of it as “The Pale Green Pants.” It’s been reissued as a small solo book, but originally appeared in The Sneetches and Other Stories. We acted it out as part of our “K-2 Book Adventure: Dr. Seuss Celebration.” I narrated, using Seuss’ words exactly, m 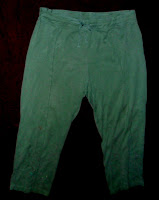 inus one section skipped to keep our time tight enough. Terri was the person who goes out on errands and keeps running into a “pair of pale green pants with nobody inside them.” Sheila played the pants by dressing in black and holding a pair of green sweat pants and floating them around. Of course the kids could see her, but they focused on the pants, just as if the pants were a puppet. The interplay between person and pants worked well, as Sheila and Terri played it up with chases and near misses, and Sheila floated the pants out towards the audience too. My only problem was that with Seuss, you really want to get the rhythm and rhyme just right. And the kids were laughing so loud that as narrator, I kept having to stop and wait for the next line. I guess that’s a good thing overall, but still. We also visited a couple of Primary School classes for Read Across America Day two weeks later and re-did this story. A summary of the whole "Dr. Seuss Celebration" is in a separate post.
Posted by steven at 8:56 PM